This was a poor, disjointed and very disappointing match. As unlikely as it may have seemed, everything that Peter Bilge blustered about came to pass. END_OF_DOCUMENT_TOKEN_TO_BE_REPLACED 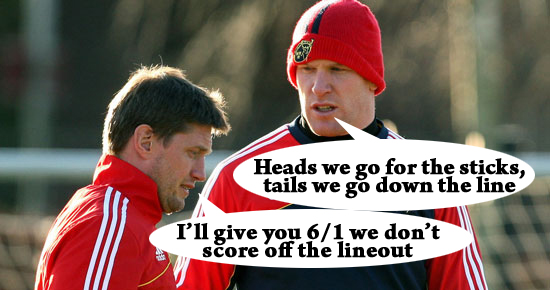 At least there's something behind it.

August 2007 in Ravenhill and Declan Kidney is struck by a precognition of the future four years from now.

Such an arduous selection of warm-up games always had the potential of throwing some injury spanners into the selectorial works, but for the most part, Ireland’s initial medical reports were largely positive. Long-term sick-notes Jerry Flannery, Stephen Ferris, Rob Kearney and Geordan Murphy have all come through their rehab and out the other side, and it looked until this week that the sole trade-off would be the luckless Felix Jones. That has all changed with David Wallace’s most unfortunate injury. END_OF_DOCUMENT_TOKEN_TO_BE_REPLACED 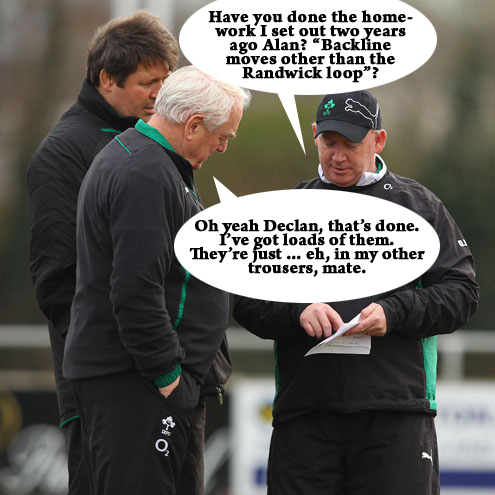 Alan Gaffney. Lovely guy. Not overly enthusiastic with how he's got our attack 'functioning'.

Sure, Ireland have held a few things in reserve over the course of these warm-up matches.  No coach wants to go running through their whole playbook in the weeks before a big tournament just so the opponents’ video analysts can figure out ways to stop you playing. END_OF_DOCUMENT_TOKEN_TO_BE_REPLACED

Ireland are in trouble. Despite the four point margin of defeat, this game was not close, and if the final score was in doubt until the last kick of the game, the winner was decided with half an hour left on the clock.

With eight minutes left to play in Lansdowne Road, an almost entirely full strength Irish team was losing to a half-strength French side by eighteen points. The French, playing their second and last of two warm-up games, and with their world cup squad announced more than three months ago, were more interested in getting out of Lansdowne Road uninjured than the cosmetics of the scoreline, and allowed Ireland two late, late tries to soothe the frustration of the home fans. END_OF_DOCUMENT_TOKEN_TO_BE_REPLACED