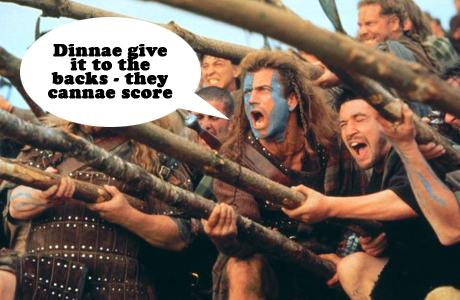 Scotland. Looking at their squad, you nod your head and take a breath in and think to yourself: “Y’know, there are some pretty serious players there.” I do, anyway. Then you remember the last couple of times you saw them play, and just how abject they can be.

Andy Robinson has announced his captain as Alaistair Kellock, which to my mind immediately rules out the likelihood of them starting their best lock pairing, Nathan Hines and Richie Gray. Kellock is a fine player in his own right, a good captain and seems like a lovely chap in the Rob Wainwright mould, but Gray is already looking like he could be Victor Matfield’s successor as the best No5 in world rugby, and Nathan Hines is long-established as one of the top front jumpers and tighthead locks in the northern hemisphere. Hines has great hands, a mean-streak a mile wide and ridiculous stamina – he played in more games than any other Leinster player last year [when you include his Scottish internationals] in one of the toughest positions on the pitch. Playing him at blindside, as Andy Robinson did during the Six Nations, gets him on the pitch but doesn’t take best advantage of his unique capabilities. Gray is going to have a great world cup – he’s both a phenomenal athlete and a proper rugby player, making tackles all over the park, dominant at lineout time and an excellent runner in the open field with an eye for the offload. The sky is the limit for this lad, and I’ve no doubt he’ll be piling up Man of the Match awards and contract offers from French clubs. END_OF_DOCUMENT_TOKEN_TO_BE_REPLACED