The bookies have set some fairly farcical odds for the Kiwi’s semi final against the Pumas. Even in a two-horse race, the former are apparently the surest of sure things. END_OF_DOCUMENT_TOKEN_TO_BE_REPLACED 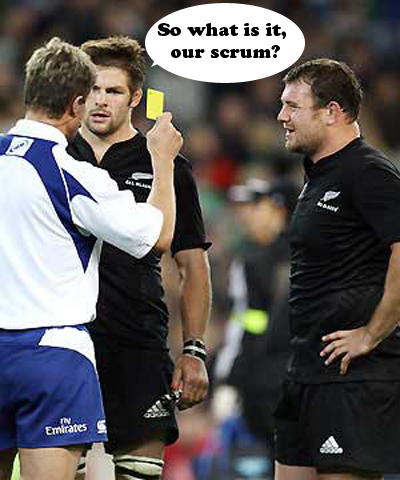 There have been suggestions from a few quarters, including Clouseau himself, that France wouldn’t try too hard against New Zealand in their pool game. Lievremont’s assertion that France could probably only hope to beat New Zealand once intimated that they would hope to pull some kind of West Germany 1954 rope-a-dope* on the best team in the world to deny them the World Cup for which they seem destined. END_OF_DOCUMENT_TOKEN_TO_BE_REPLACED

Leinster have a plethora of internationals in New Zealand. A combination of RWC and a summer clear-out has changed the face of the Ospreys. It is difficult to know exactly what to expect from these teams in the opening game of the RaboPro12. END_OF_DOCUMENT_TOKEN_TO_BE_REPLACED