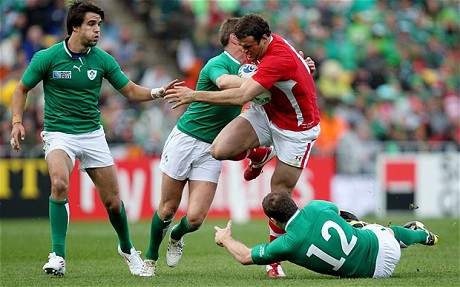 How Do Ireland Stop The Big Bopper?

The Mole proved himself a braver man than many of the Irish team by sitting down today to watch a recording of the quarter final against Wales. Braver than brave. Braver even than England’s Brave John Terry ©. Hand over the VC etc. Apparently a number of the lads involved can’t face it and haven’t watched the recording of it. Understandably it’s a bit of a heart-breaker, but I hope that’s more of a symbolic “I haven’t looked at it again” as in, “It’s all behind us now, we have to move forward and leave it in the past” rather than a genuine “I haven’t looked at it again”. Eh, you’re playing the same team in a couple of days lads … I’d get a nice hot cup of tea into you for the shock and sit down and watch it again pretty sharpish.

When you look at a defensive performance of the quality that Wales produced, it’s perhaps a little difficult to pinpoint ways to break it down. The Mole thought that Ireland created some clearcut chances – Sean O’Brien was held up over the line from a lineout maul and Rory Best was within inches of scoring from a similar effort – and a reasonable number of half-chances, but were prevented from taking the points out of them by some brilliantly drilled technical defense and then some of the kamikaze stuff when that went awry. 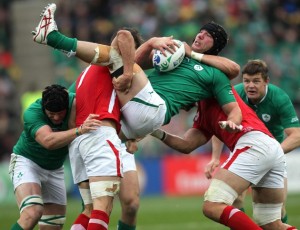 The perception in the aftermath of the game was that the decisive factor in the loss was the way in which Wales managed to minimise the line-breaking threat of Sean O’Brien and Stephen Ferris. Both players were less effective than they had been against Australia and Italy, and were unable to break off any of those big midfield runs which smash holes through defensive lines and allow support runners to pour through. With the amount of times that particular aspect of the game has been referenced in the interim, whether it be in hagiographic articles about Sam Warburton or in maudlin thinkpieces about ‘Where The World Cup Went Wrong’ [guilty as charged – we all partied, in a maudlin sort of way], the Mole actually expected the Welsh backrow to be super-dominant in the recording.

They weren’t. All they did was keep on making tackles. Apart from some good early work from Toby Faletau – and I mean very early, in the build up to Shane Williams’ third minute try – the Welsh backrow hardly touched the pill. Brian O’Driscoll won as many turnovers at the breakdown as Sam Warburton, and Dan Lydiate wasn’t exactly a leek-eating version of Harinordoquy out of touch. They just tackled like dervishes. That was enough.

That element of the game got a huge amount of coverage, and is still being referenced as the key battle for the weekend’s game. Something that barely got referenced in the direct aftermath, but is shockingly obvious when you watch the tape without the immediacy of emotion, is just what a horror of a game Ronan O’Gara had at No10.

He turns over the ball four times in the first half alone, twice in the Welsh 22 when Ireland are on the attack. There’s an early knock-on about 8m out to the right of the posts, where he hears footsteps with JJV Davies approaching, and there’s a penalty against him for failing to release when he runs down a blind alley into a Sam Warburton tackle – they’re the two turnovers inside the Welsh 22. Then there are two kicks which go dead and give the Welsh a scrum all the way back on halfway. Those are just the absolute definitives, the ones that nobody can argue with; you could look at other areas of his decision-making [such as his part in deciding to kick for lineouts from penalties, rather than take difficult shots at goal] and find fault if you’re that way inclined. Whether you’re an O’Gara-believer or an O’Gara-sceptic will largely form your opinion on those incidents: after all, we came close to tries from those lineouts. On the other hand, Ireland don’t get on the scoreboard until 20mins in, and that’s with a kick from 15m out in front of the sticks, something you could throw over … with your bad hand. 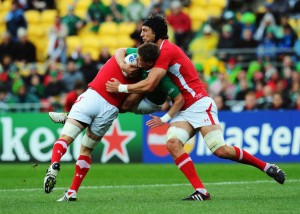 Radge on one of his ill-thought-through breaks. The Welsh laid traps for him all through the first half and he took the bait too often.

What’s not in question is that Declan Kidney took him off the field after 55 mins, when a woeful pass to nobody skittered between Gordon D’Arcy and Rob Kearney and put Rory Best under pressure deep inside the Irish 22. ROG had an absolutely horrific outing.

This was the last international Ireland played. It was against the same team that they’re playing on Sunday.

Gatland played ROG perfectly in that game, cutting off outside passes with an advanced defender, knowing that O’Gara had neither the strength nor the pace to make anything happen with a break of his own. ROG either didn’t read the defense or felt compelled to show that he could play the way Sexton plays, because he took the ball to the line with all the little-sister physicality he’s famous for and got swallowed up in Welsh tackles at least three times.

Sometimes You Do The Right Thing, And The Wrong Thing Happens

Interestingly, one of the typical tactics that you use to instill a bit of fear in an outside-in defense was used within the first minute and then abandoned. Why? Because unfortunately it sent horribly wrong. Keith Earls – stationed off his blindside wing in the middle of the pitch from an Irish lineout on halfway – took an inside pop from O’Gara and careened into the Welsh defense; he was hit hard in a gang tackle and lost the pill forward, and Ireland wouldn’t touch it again until Rob Kearney caught Rhys Priestland’s successful conversion. Ouch.

He wasn’t the only one getting turned over in the tackle. Jamie Heaslip had a game where he was made to look foolish by running laterally and getting escorted into touch with demeaning ease. The lateral running might be a habit that you can get away with in the Pro12 or in a team that’s more used to how you play – and thus offers more runners off you to straighten the line or draw defenders a step further in to allow you to round them – but at international level it looked embarrassingly amateur, the sort of thing that’d have a GAA manager hooking you off the field before the halftime whistle. For all their faults, the moneybag bainisteoirs don’t spare the rod and spoil the child when it comes to substituting non-performers. They’re almost off the park and back in the dressing rooms before the anthem is over.

And The Moral Of The Story Is …

There’s no moral – there’s no overarching theme that leads Ireland to victory, like “Be daring!” or “Be cautious!” or “Just be yourself and I’m sure the other kids will come around to you!” 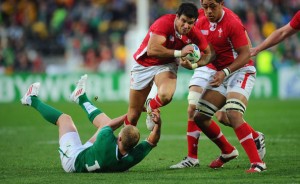 Earls had a torrid day in defense against the big Welsh backs, missing four tackles. Not many people saw this one, because it came on the other side of a scrum just after the hour mark. Phillips went blind, Earls went low, the crowd went "Ooooooh!", the camera switched to an overhead position, and then you saw Earls spreadeagled on his back. Ouch.

The first thing that Ireland need to do is cut out the errors – the over-long box-kicks, the knock-ons, the kicks out on the full, the missed tackles – as much as they can. Obviously players always try to minimise their error count without becoming overly cautious, so “Play better” [“I told him to do that,” in the words of C. Montgomery Burns] is a bit of a pointless instruction. Still, handling errors and missed tackles are really where the game was lost against the Welsh.

How to win it? We should have more than their largely second-string front five in two of the set-pieces, so it would be wise to feel out how their scrum and lineout are functioning early on in the game. Down Charteris and Alun-Wyn Jones, their lineout will definitely be more open to attack. Adam Jones and Bradley Davies will provide a solid scrummaging unit on the tighthead side, so it’s not at all as predictable that there’ll be stress lines through the scrum.

Target Warburton by running at him, much as the All Blacks targeted Pocock. It sounds counter-intuitive, but there’s a method to the apparent madness: if you force him to make the tackle first up, he’s not as much of a threat as a jackal – it’s when he’s the second man in to the tackle area that he’s at his most dangerous.

D’Arcy has to go low on Roberts and hold on for dear life, cliffhanger style, especially off Welsh lineout ball. Phillips often cuts out Priestland and throws a very flat pass to a charging Roberts, who’s almost over the gainline before he even has the ball. It requires a great deal of skill to take the ball at such pace, and a great deal of size and confidence not to get smashed by the waiting defence, but we saw Roberts do it time and again during the World Cup.

Maybe the key to the attacking strategy is variety. Variety can be introduced by something as simple as putting up bombs – with Trimble, Bowe and Kearney chasing, Ireland have three fast, physical athletes who are strong in the air and give at least a 50/50 chance of reclaiming a well-placed garryowen.

Use big runners like O’Brien and Ferris in wider channels, like they were used in the 2010 Autumn International series, and get backs running off them! It’s harder to gang tackle players outwide. The opposite side of the argument is that it’s easier to get isolated as a ball carrier. Still, Ireland will need to take some risks to win this one, and they will certainly need to change their gameplan from the last encounter.