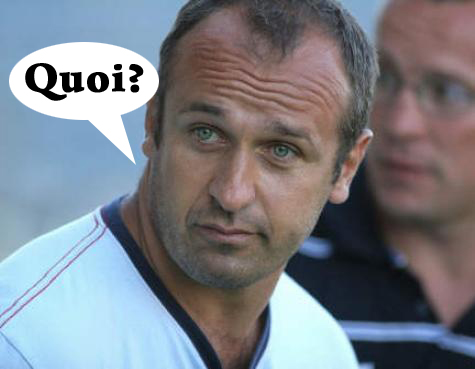 French rugby looks to be in a good place. Runners-up in a World Cup Final they could have won, playing in spite of a coach who had led them on the most bizarre journey over the previous three years; now coached by an experienced and well-liked former international who has been around the houses and never talks bombastically. France sit comfortably as favourites for the 6N championship.

What will Philip Saint-Andre bring to this French team? What will be the headlines in L’Equipe on the Sunday morning after the Italy game, or the following Sunday morning when they have faced Ireland in a late night contest in Stade de France?

Saint-André’s coaching career has encompassed Gloucester, Bourgoin, Sale and Toulon. Unexpected wins of the English Premiership and European Challenge Cup at Sale have been the highlights of his coaching career. However, others would comment that at the end of his five-season sojourn in Manchester, the club was no better off than when PSA arrived.

Saint-Andre was capped 69 times for France, initially as a centre, but more regularly on the wing and captained the side in some historic victories. Probably his greatest achievements in that role were the double victories against New Zealand in the Land of the White Cloud in 1994. He was selected as captain for that tour, succeeding Olivier Roumat, and the French wins were viewed as the start of a run which should take them to a World Cup win in 1995.

That short series in NZ could very well have been forgotten by now – even though it was a major upset at the time – were it not for a stunning try that characterized everything that is good about French rugby. This was long before the days of YouTube, and it was a try that you heard about for an awful long time before you actually saw it. Saint-André even had the sang-froid to come up with a great title: he called the play that led to the winning try “a counter-attack from the end of the world”, and it stuck like glue.

But this was as a player, not a coach. During this time at Sale, PSA installed a fairly hard-nosed pack and a good pair of half-backs and they played pragmatic successful rugby, which may have been under-estimated by the London-centred Sky Sports rugby team but nevertheless remains as the last occasion in which Sale threatened to bring a Northern team to the top of the English Rugby heap.

In his most recent coaching post in Toulon, the story was different. Over two seasons and despite appearing to have the benefit of an open cheque book and a very liberal interpretation of the “salary cap” which operates in the Top 14, success was not attained and his coaching exploits were overshadowed in particular by those of Fabien Galthié, who led Montpellier to a first Top 14 Final and almost a win over hot favourites Toulouse.

In Toulon, the changing room pundits say that PSA could never quite handle his extraordinary club owner Mourad Boudjellal, who insists not only on a voice in selection but also a presence in the pavilion before the game kicks off. There will be no such distractions in the changing room of Les Tricolours and only the voices of coaches will be involved in selection decisions.

Based on his track record to date and the availability of all of their World Cup players, France should cope with the Italian challenge easily in their first Six Nations game. However, if they do not and even if they scrape a win in a dour encounter, it could be the signal that this group of French players is feeling the effects of a long – very long – season that for many commenced back in August 2010, i.e. 18 months ago, and still has some five months to run until they mercifully award the Bouclier de Brennus in June.

Experienced observers of the Top 14 have suggested that despite the efforts of Noves and  Cotter in Toulouse and Clermont respectively, the majority of French RWC players are looking and playing jaded. The recurrent injuries to Harinordoquy are indicative of this stress.

So, PSA has had a good entrance to his new role. A French squad that looks ominously strong with no off-the-wall selections. But possibly the exertions, both physical and emotional, of his players during that RWC tournament may yet prove a factor in this Six Nations. Ireland must hope so because without some disadvantage, PSA and his squad should take a Grand Slam without too much fuss.