Ivan Dineen’s blistering performance when allowed off the bench against the Scarlets was an enjoyable feature of a mistake-ridden game and hugely encouraging for fans of the player. To describe Dineen as a peripheral figure over the last two seasons is to do injustice to those peripheral figures in the Munster squad … in truth, with just one start in his Munster career [and that coming a full eighteen months ago] he had more or less slipped off the radar entirely.

However, he did manage a try on his sole professional Pro12 start, and he has shown good tradecraft as a centre in the few matches in which The Mole has seen him play. He was introduced into the Munster squad in October 2010, having impressed enough with Cork Constitution to earn himself a chance with Munster ‘A’ in the start-of-season interprovincial championship. The Mole saw him put in a praiseworthy performance in Donnybrook back in September 2010 [the same match in which a second-half display from Conor Murray really lit up the stands] and expected to see much more of him over the season. It didn’t pan out, and given his lengthy absence from action – he hadn’t featured for Munster in a first grade fixture for sixteen months before returning to the fold a couple of weeks ago – I was fairly sure that the train had sailed on his career at the province.

Ivan Dineed banged in a try in the first (and only) start of his Munster senior career. Whether through illness, injury, form or confidence, he hasn't seen much pro rugby this year, but he hit the ground running against the Scarlets with a cracking performance off the bench.

His hard-hitting and quick-footed cameo off the bench in Parc y Scarlets may just have done enough to persuade somebody in the Munster Branch to extend his contract, and I think it’d be a decent bit of business. Granted, he’s woefully short of professional experience for a guy who turns 25 over the summer, but everything I’ve seen of him says that he can be a decent Pro12 player for Munster in what has long been a problem position: No12.

Despite knowing that there was a chance that McGahan would head off – any time your contract is up for negotiation, there’s a chance that you’ll head off – Munster again shelled out on centres in January, with James Downey [31] returning to Ireland from Northampton and Casey Laulala [29] of the Cardiff Blues making the move across the Irish Sea. Lifeimi Mafi has put in 142 games for the province over six seasons, and was always going to leave a hole that required filling. While Dineen has struggled with illness and injury since his initial contract, Mafi has been an absolute Spartan, always available for selection and always willing to put it about physically.

Downey in his first brief stint at Munster. Given the amount of games he has put in for Northampton over the last five seasons, his best years might well be behind him. It's difficult to know how he'll translate from the Aviva Premiership and a team where he has become part of the furniture to a different league, a different training set-up and different team-mates.

Downey has showed similar durability for Northampton and is viewed in some quarters as the solution to Munster’s ongoing problems in the No12 jersey, but at 31 years old, with little pace, ordinary distribution and no kicking game whatsoever, it’s difficult to believe that he’s going to be a viable long-term solution. Sure, he can crash the ball up and make a target for the pack, but the idea that teams won’t cotton on to that is naïve; some overly-optimistic fans expect him to be an Irish answer to Jamie Roberts, forgetting that Roberts had enough football to start out his international career as a fullback and enough pace to play on the wing.

In theory, Downey and Earls should make a complimentary partnership: Downey will bash the holes and Earls will run a trailing line and scoot through the gaps. Earls has made enormous strides as a centre since the turn of the new year, and was one of the few successes of Ireland’s Six Nations campaign. But where does that leave Laulala?

It’d seem to be a regressive move to shift Earls back to the wing once again: he has often spoken about his dissatisfaction with being moved around from position to position, and his performances for Ireland in February and March have been reassuring in terms of a succession plan to follow O’Driscoll’s international retirement. Besides Ireland’s medium-term needs, Howlett’s return will tie down one of the Munster wing spots. He gives enormous value to the back three in both defence and attack, and it’d be impossible to drop Simon Zebo after the fantastic season he has had. 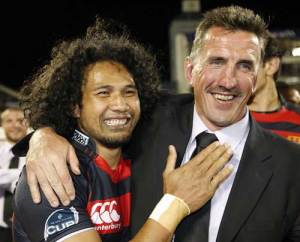 Casey Laulala and Canterbury coach Rob Penney, one of the shortlisted coaches for the Munster job. The identity of the new coach will have a major influence on who plays where – Foley will know EVERY member of the squad bar Laulala (he was still playing when Downey did his stint with Munster), and Penney will know NONE of them bar Laulala. Somebody from outside the Munster boot-room might be just what the doctor ordered, but there are a lot of demands and restrictions on provincial coaches from the IRFU with which a newcomer will find tough to get to terms.

Unless Laulala is played as a No12 [not his natural position] inside Earls, it’s hard to see the logic of the two signings at centre. Maybe the Downey contract isn’t all that costly, and he’s just seen as an Irish-qualified guy who can fill a role in the squad … he’s a one-position player though, and while the addition makes sense in terms of replacing Mafi, it doesn’t really make sense to bring in both players. Sure, Laulala might well see a lot of games in the Pro12 as a No13 given the infrequency with which centrally contracted players play in the league, but it seems a bit of a waste to have an expensive NIE centre on the bench – or perhaps not even on the bench, because he’s not particularly versatile – for HEC games.

Danny Barnes [22] is a tidy footballer and tackler, and has made a fine start to his professional career, with a serious nose for the tryline a real feature of his game. The contracting of Laulala and Downey, as well as the success of Earls’ stint at centre for Ireland, puts him in an invidious position. Unless there are injuries, the games simply won’t be there for him as a No13 for the next couple of years. Either Earls will get the HEC games and Laulala the Pro12 games , or Laulala will simply play the vast majority of games – after all, that’s why you pay foreigners the big bucks.

The same circumstances apply to Dineen. He might have guessed that he was playing for his future against the Scarlets and put in the display of a lifetime, the type of performance he’s unlikely to repeat … or instead that might be a fair indicator of how he can play when he’s fit and given a shot. As a 25 year old No12 with very few miles on the clock, he can be a valuable player in the long-term if he can stay fit and healthy. The highly-rated JJ Hanrahan is on the way up, but the British & Irish Cup semi-final in the RDS somewhat passed him by. On that evidence, he’s not quite as ready for the Pro12 as his supporters would suggest.