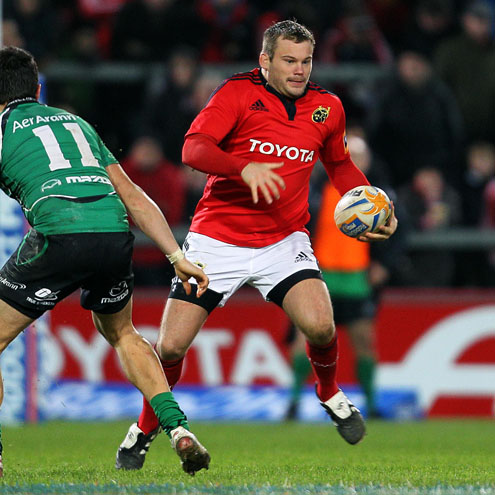 Fogs Jnr is out of Munster and off to Aurillac, the Jeremy Davidson-coached Pro D2 outfit. There's been a lot of movement in the Munster squad this season – and probably more to come – but this is a curious one.

Munster hooker Denis Fogarty is off to Aurillac at the end of the season. Aurillac currently play in the Pro D2 [France’s professional second division] and are coached by former Ulster, Ireland and Lions second row Jeremy Davidson. They’re not doing too well at the moment and are currently stuck in eleventh place of a sixteen team league, having won less than half their matches.

It’s a very curious move. Frankly, The Mole thinks that he could have done better. Fogs has played 90 times for Munster, and has featured in 18 Heineken Cup matches, starting 5 of them. He’s got a Heineken Cup winner’s medal from the 05-06 campaign [where he came off the bench in four games as a 22 year old], a couple of Celtic League winner’s medals from the 2008-09 and 2010-11 seasons, and a Churchill Cup medal from Ireland A’s glorious romp through that tournament in the summer following the Grand Slam. He’s been capped 7 times for Ireland ‘A’ /Wolfhounds in total and, at 28 years old, probably has a good four or five years of front row rugby in him.

Maybe he fancies the move because he’ll get to play a lot of rugby. The majority of his appearances for Munster have come from the bench, and with Damien Varley and Mike Sherry installed as a one-two punch at hooker by the end of this season, he might have felt that he had been squeezed out for good and that it was time to move on.

Why Aurillac, though? If it was the move to France that interested him, Fogarty is certainly good enough to play Top14 rugby – in The Mole’s eyes at least. He’s got some issues with his throwing at lineout time, but it feels like they’ve been overstated at times: the first time one goes wrong for him, everybody gets on his back. On the plus side of the equation, he’s got quick feet for a front rower and very good hands, and is a very lively runner when play breaks open a bit. He’s also physically a good bit bigger than his older brother, former Connacht and Leinster hooker John, and no mean scrummager. There’s a lot to like there.

The Mole wrote before that he thought Eric Elwood should have made it his first priority to swoop in and pick up Fogs Jnr for Connacht. South African Etienne Reynecke [30] has been a great pick-up and stalwart Adrian Flavin [32] keeps ticking on, but with Dermot Murphy having been let go, those are the only senior hookers in the Connacht squad for next season. You can understand Elwood’s decision not to pull the trigger if it came down to a choice between signing Leinster’s New Zealand-born Nathan White at tighthead or Fogs Jnr at hooker: Connacht have felt the need more sorely at tighthead this season, and it’s probably a more important position the way the game is currently being played.

On the other hand, maybe Connacht simply wasn’t for Fogarty: maybe he wanted to get further afield and taste life in a different culture and a different climate. If he didn’t push for a Top 14 club, perhaps it’s because the prospect of being rotated in and out of the starting line-up and spending more time on the bench didn’t do much for him. He’s done enough of that in his career already. I’ve little doubt that he’ll start a ton of games for Aurillac, and that’s probably what he wants to do: just play rugby.

2 thoughts on “Denis Fogarty Hitches His Wagon To Aurillac”