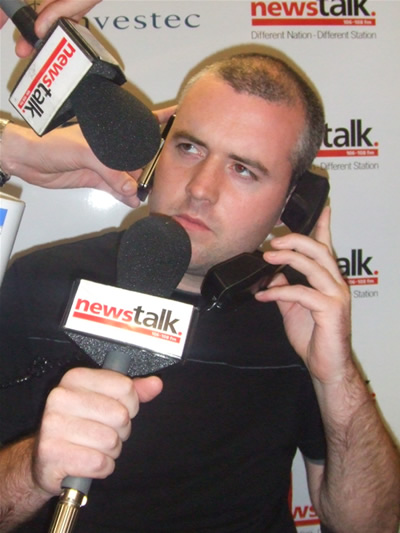 When is this guy going to get his Radio Oscar for services to humanity? He should have been Pope, Ted. Or at least president.

How do I love Off The Ball? Let me count the ways: a lot.

It really is a highwater mark for Irish sports broadcasting, a one-program golden age. As a man who turns off an awful lot of radio programming in double-quick time, Off The Ball is the one regular transmission which not only escapes the cull, but is [occasionally] actively sought out on the morning after.

The contrast between the smug certitude of Darragh Moloney on RTE and the self-deprecating, well-informed and basically just sound lads [Eoin McDevitt, Ken ‘Burley’ Early and Ciaran Murphy] of Newstalk is so marked that you’d wonder if anybody under the age of fifty [seventy? eighty?] still listens to Moloney sh*te on and smirk his way through some prime interview candidates, somehow managing to avoid asking any pointed questions or even listening to the answers he gets.

Shaggy Vs Woody: Back Vs Forward, Leinster Vs Munster, Hirsute Vs Bald

Last night, The Mole caught up with a cracking debate between Shane Horgan and Keith Wood on the make-up of the Irish backrow which had been broadcast earlier in the week. Both men made lucid and forceful arguments and – somewhat shockingly in an Irish rugby media that is dominated by the twin heffalumps of Tom McGurk and George Hook – actually listened to what the other said.

Shaggy was big on the fact that some very serious international teams play without ‘natural’ or ‘groundhog’ opensides, namely France and South Africa. Of course, both these teams have the luxury of IRB International Player of the Year winners on the flank: the reigning 2011 holder Thierry Dusautoir for France, and 2004’s winner Schalk Burger for the Boks. Horgan went on to point out that Ireland have long played with David Wallace in the No7 jersey, who wouldn’t fit inside many people’s definition of a ‘natural’ openside, and that those years coincided with the most successful period in Irish rugby history. It’s been quite a while since a ‘natural’ openside was in the team as a regular starter – all the way back to Keith Gleeson in 2005, seven years ago.

Essentially, Horgan felt that the Ferris/O’Brien/Heaslip unit was a backrow that had performed exceptionally well together in the World Cup against Australia and Italy, and that it was a case of them re-finding that balance of how to play together again. 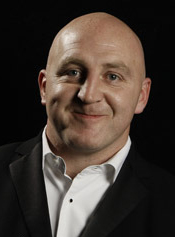 Wood wasn’t buying that, pointing out that those good backrow performances had come against teams who didn’t have a world class openside: Pocock had been missing for the Aussies due to injury, which meant they had Ben McCalman, typically a No8, playing on the side of the scrum, and while Mauro Bergamasco is not as old as you might imagine – he doesn’t turn 33 until May – his international career started back in 1998. He has a hell of a lot of miles on the clock and is a fading force at international level.  Besides, he was always more in the David Wallace school of opensides, a bustling runner and powerful athlete.

Wood argued that the first time Ireland came up against a world class openside was the quarter-final against Wales and Sam Warburton, and that they struggled badly. The Mole has gone on record in the past that he feels the impact of Warburton in that game is a little overstated [and certainly Eagle Sam had very little effect on the most recent game between the teams, limping off at half-time] but that still doesn’t make Wood’s point invalid.

At pains to express just how highly he rated him as a player, Wood compared Sean O’Brien’s performances in the 2011 Six Nations to how he has played so far in this year’s championship. He makes the same point in his column in yesterday’s Evening Herald:

“His running lines are to get to the ball and the breakdown earlier, so the depth is gone … gone are the images of him cropping up in the most unlikely places in the backline; gone are the wrecking ball images we marvelled at in slow-motion.”

Wood’s suggestion is to switch O’Brien to No8, drop Heaslip and bring O’Mahony in on the openside, and the Mole is in agreement with his sentiment that the game against Italy was the opportunity to conduct that sort of experiment. Personally speaking, I think that O’Brien has looked a little tired and flat this year, and it’s not all down to playing a different position … he just had an absoutely massive season last year, playing high-impact game after high-impact game. Heaslip had a quiet World Cup, but has been building form since then and [in the Mole’s opinion] has looked in better form than O’Brien since New Zealand.

Just Ignore The Fact That They Don’t Grow On Trees

The key issue that nobody really brought to the table is that there isn’t an international calibre ‘natural openside’ in Ireland. The best openside in Ireland this year has been the terminally unfashionable [and now lucklessly injured] Niall Ronan.

Shane Jennings of Leinster is a groundhog of the Peter Winterbottom school [i.e. a teak-tough cheat with a great rugby brain], while Ronan is an old-fashioned link-man in the mould of Martyn Williams, a runner and a passer rather than an immovable anchor over the ball at the breakdown; there are distinctions even in the ‘natural openside’ category. Jennings hasn’t been at his best this season, and while his international starts have been too fitful ever to give him a fair chance of fitting into the team, you get the feeling that his time has come and gone.

For Ulster, Chris Henry has put in three big seasons in a row but is very obviously a No8 playing openside; Willie Falloon is the sort of guy that everybody wants to see do well because he’s a tidy player, but he’s never put in a really stand-out game at HEC level, which would seem to be an indicator that he’s not going to be up to contributing at international level [and somebody has made a pretty laughable mistake on the Ulster website about his height and weight]. At Connacht, Jonny O’Connor is 32 and nearing the end of his career; he has huge miles on the clock and has accumulated serious injury after serious injury due to his lion-hearted style of play.

What’s That? Your Solution Is To Play A Blindside At Openside? 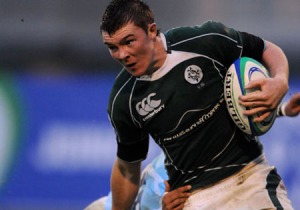 Peter O'Mahony as a No8 for Ireland U20s. Hell of a prospect, but a 'natural openside'?

That’s sort of the key issue. For all the harrumphing about how Sean O’Brien isn’t a natural openside, Peter O’Mahony isn’t really a natural openside either. The bould Pete played his underage representative rugby for Ireland on the U20s as a No8 [as captain, incidentally], and made his breakthrough into the Munster team as a blindside.

In the two matches he started in the 2010-11 season for Munster [the friendly against an Australian XV and the game the following week against the Scarlets in November 2010] he started as a blindside. In fact, this is the sum of O’Mahony’s professional starts at openside:

Three games, two of them in the Pro12 against Italian teams. The ‘natural openside’ on the Munster team this year has been Niall Ronan, who was having the season of his career until he suffered a serious knee injury. That’s the only reason that O’Mahony started in the No7 shirt against Northampton.

You Can Do It!

That’s not to say that O’Mahony shouldn’t get a run out in the No7 jersey [rather than in the No19 jersey off the bench] to show what he can do. He may not have a huge amount of experience in the position, but he has an abundance of aggression and tenacity, and attitude is as important as physique for competing at the breakdown. There’s always a reason not to pick a player – debuting in Paris has left Irish bodies on French soil/they’ve a good openside/”we need to win this one” – but sometimes you just need to make a call on it.

Having genuine depth means that you have tough calls in selection, and you have to leave good players on the bench. Sometimes you can’t rely on Ireland’s best selector [injury] to do the job for you, and you have to make a hard call yourself.

9 thoughts on “The Backrow Debate”