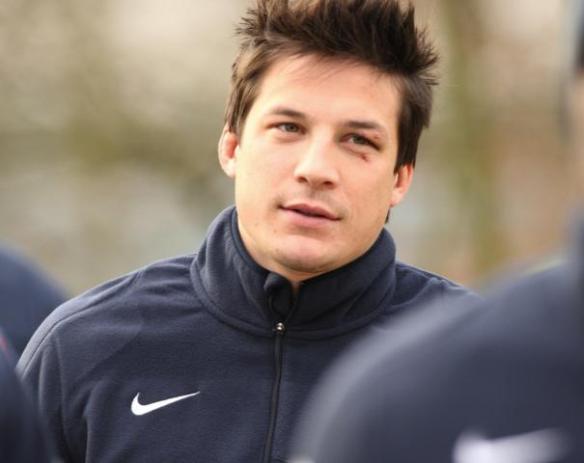 Francois Trinh-Duc: the French outhalf struggled to put shape on the game when the Plan A – Bash It Up The Outhalf Channel – fell on its face.

The Mole thought in the build-up to the game that the absence of Yachvilli was overplayed by some commentators. Parra is such an accomplished operator in his own right, and is perhaps a little more dangerous as a runner.  However, Yachvili has a wealth of experience that Parra can’t yet hope to compete with, and it showed in a couple of circumstances.

In Tommy Bowe’s second, abortive intercept attempt [which occurred off a French lineout thrown to the enormous Maestri at the tail] the Ulsterman is in the Irish defensive line for a good 15-20 seconds: he doesn’t race there from his typical defensive position as a surprise. From the moment the lineout assembles – and it’s slow to do so – he’s there, standing as the first man in the backline. No disguise.

Morgan Parra needed to have his head on a swivel, because he wasn't getting much help from his outhalf.

A more experienced scrum-half notices that [or failing that, his outhalf sees it and tells him] and pops a low rolling box-kick over the lineout and down the line into the enormous empty space for a winger to chase. What’s more – and this seems so basic that it’s almost silly – the French players can tell each other this without giving the game away, because they speak a different language from the opposition. Trinh-Duc can tell Parra that there’s a big gap behind the lineout, and Parra can tell Malzieu what he’s going to do, and nobody on the Irish side is any the wiser.

Trinh-Duc just did not have a good game, and seemed unable to figure out how to counter the outside-in Irish backline defense and quick linespeed. Fofana bagged an opportunistic try, his third touchdown in three games in his first championship, but other than that he struggled to get involved. Aurelien Rougerie, who was earmarked as posing a huge threat to Keith Earl’s nascent stint in the No13 jersey rarely got the ball with anything like the space or momentum

Ferris and Sexton line up Aurelien Rougerie en route to another first-half turnover.

It wasn’t just Trinh-Duc. As a team, the French seemed intent on attacking the No10 channel, presumably under instruction from their coach. However, Jonny Sexton put in probably the best defensive performance from an Irish outhalf of the professional era. Hyperbole? Look at the evidence. Sexton was instrumental in no fewer than three turnovers in the first half alone:

At 20:19 Sexton also comes up out of the line to smash Fofana in the middle of the pitch on the Irish 22m line, almost knocking him out of his shoes. There’s no turnover, but it’s a huge and crucial hit in a vulnerable defensive position. The Leinster man had an enormous defensive performance.
He needed to: his first attempt at goal was of the gimme/throw-it-over variety from 38m out right in front of the sticks, but he snap-hooked it horrifically and was nowhere near. Immediately the conversation about his temperament that had lulled into silence after his 7/8 return against Italy roared back into life. It’s the sort of kick with which most goal kickers would hope to open their day’s accounts with minimal fuss, but instead Sexton botched it horribly. O’Gara gets that kick nine times out of ten, maybe every single time.
However, the trade-off is that O’Gara simply doesn’t put in those hits, or isn’t strong enough to hold people up, or simply gets plowed. Everything about the game changes when you have a defensive liability at No10 – you play the game on the back-foot, you have a retreating pack, and you have less ball.