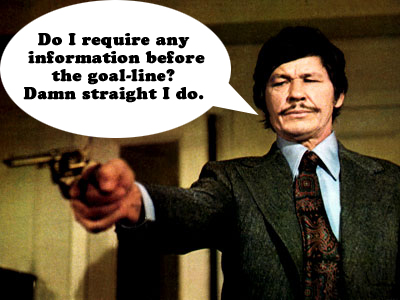 George Clancy is no Alan Lewis. He lacks the silver barnet, the well-applied Egyptian Gold #4 spray tan, the sparkling conversation and the tasty batting average, but maybe we’ve been a bit hard on old George here in Demented Mole Towers. Like commentators, referees take some time to bed themselves into the good-books of the rugby public, but George went up in my estimation when he shook off the shackles of IRB protocol to call it like he saw it [hmmm … call it like he didn’t see it the first time around, perhaps] and disallow Jimmy Cowan’s try-that-never-was because of Israel Dagg’s forward pass.

He went outside the laws to make the right decision – like Charles Bronson in Deathwish.

This is what Andre Watson, the head of SA referees, had to say on the matter:
“What we want is the right decision. It was clear that the pass was forward and if the try had been allowed we [referees] would have looked a bunch of fools. Protocols are important and we should try to stick to them but they are essentially guidelines and I’d rather apologise for what happened than get the wrong answer.”
http://www.ruggaworld.com/2011/08/22/an … dy-obrien/

3 thoughts on “Justice Has A New Name”