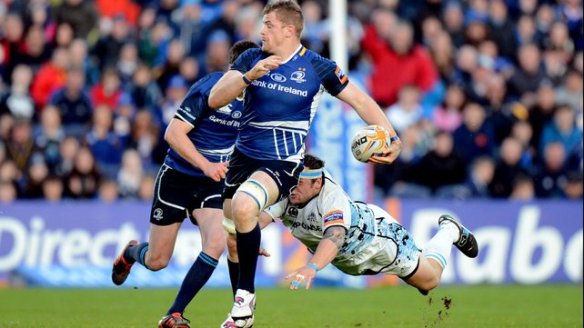 Vintage Heaslip: Jamie Heaslip backs himself and goes around the outside of the Glasgow defense for a fifty yard break. The Leinster No8 still hasn’t lost a match as captain of his province.

Leinster battled out a teak tough eighty minutes against a gritty Glasgow side to seal a place in their third successive Magner’s League/Pro12 Grand Final.

Glasgow’s coach Sean Lineen is leaving his role to take up a new post in the Scottish Union. He’ll be replaced by current Scottish attack coach Gregor Townsend. For all the many steps forward that Lineen has made with his Weegie Army, Townsend’s appointment drags them backwards at a rate of knots, like Jaws towing a dinghy. Nothing in his coaching career suggests that this will be a success. 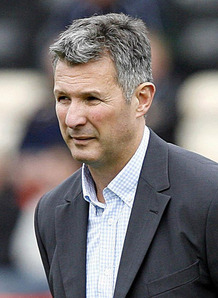 Lineen is all class. Scotland are getting a real gem, but it remains to be seen if the national side will benefit to the same degree that Glasgow stand to lose.

It’s a real pity, because Glasgow have established themselves as legitimately amongst the best teams in the league. They only lost five times this season – the same number of losses as second-placed Ospreys – and have been as tight as a clam in defense, conceding just 23 tries in the regular season. Their performance in the league table makes for an interesting read: drawing four games out of twenty-two is something of an anomaly in rugby, because there are so many different ways to score. In soccer, you can only get so many different results, because a goal only counts for one point [or do they even call it a point? Are they just counting the goals?] whereas in rugby there are tries, conversions, penalties and drop-goals that range in value.

They drew 14-14 with the Dragons in Newport in December and 23-23 at Edinburgh later that month, then 13-13 with Connacht in the Sportsground in February and 10-10 with Leinster in Firhill the following week. Bagging draws away from home speaks of good team morale and discipline, and while the Glaswegians are certainly no saints on the pitch, they rarely cough up cheap penalties.

As a player, Lineen formed a cracking centre partnership for Scotland with Scott Hastings. His teams don’t necessarily reflect the style of rugby that he might like to play in an ideal setting, but he certainly knows how to get the best out of them. Glasgow play with a lot of toughness around the breakdown, very fast defensive line speed and no naïvety whatsoever. Their players ‘roll away’ onto the opponents side, they compete for the vast majority of balls on the deck – sometimes even going off their feet to do so, you’ll be shocked to read – and they don’t throw excess men into rucks. As a result, rucks are relatively short front-to-back [i.e. in defensive terms the hindmost foot isn’t all that far from where the ball is on the opposition side] and they come up immediately and fill the space, rather than looking to see what their opposite man is doing and reacting to that.

When the margins are tight, you’re going to stray into illegality fairly often, and against Leinster, Glasgow were choosing their defensive offside line as ‘near enough the back of the ruck’ rather than ‘behind the hindmost foot’. Like C. Montgomery Burns once said, it’s what good managers do to win ball games.

Like anything in rugby, you can combat it. If a defending team is fanning out wide and isn’t committing men to rucks, have a carrier pick it up off the back foot and go right through the middle of it. If they’re coming up fast in the backs, try a dink over the top, or roll a grubber through.

Half-backs: Half Good, Half Bad

The Mole is a big Reddan fan, but he didn’t have his best game against Glasgow. It’ll be very interesting to see who starts against Ruan Pienaar in the HEC final – Isaac Boss’s form this season has been consistently good, and he’ll really fancy his chances against his former team.

Unfortunately, Leinster didn’t partake of either option often enough. The halfbacks didn’t particularly play well, despite Jonny Sexton’s Man of the Match award. Eoin Reddan had a couple of poor kicks directly into touch in the first half, and Sexton missed touch from penalties twice; it’s not really what you expect from either player.

While Leinster looked very accurate at times with ball in hand [including a whole range of nice midfield backline moves], the Glasgow defensive effort was comprehensive – they rarely missed first-up tackles, and when they did, the cover defense was always racing across. You’d have to be a real harpy to fault their work-rate.

Leinster were also significantly affected by injuries to their two starting centers midway through each half. Gordon D’Arcy took an accidental knee to the head from an on-rushing Brad Thorn after about half an hour, and on fifty minutes Eoin O’Malley had to haul in an absolute hospital pass from D’Arcy’s replacement Ian Madigan that saw him badly isolated with half the Glasgow pack rucking over him. No element of blame can be attached to any party for the injuries – it’s rugby, it’s a collision sport. All the same, Leinster supremo Joe Schmidt could have done without either of them, never mind both. With two backline subs [first Madigan and then 20-year old speedster Andrew Conway] on the pitch before schedule, Schmidt wasn’t afforded the luxury of bringing on Isaac Boss for Reddan as he would normally do. In the end, Boss took the field as a winger for the last three minutes of the game to cover for try-scorer Dave Kearney, who seemed to take a knock attempting the tackle on replacement Glasgow hooker Dougie Hall as he dived over for the first of his side’s two consolation tries.

Lineen essentially used his entire first-choice front row as impact subs, with Moray Low, Hall and Pro12 Loosehead of the Year Jon Welsh coming off the bench in the second half. Unfortunately for Glasgow, their back-ups had a below-par display. Hooker Pat McArthur was frequently awry with his throws, negating the lineout prowess of Scottish second rows Gray and Kellock, and the front row as a unit had a tough day in the scrums against the Cian Healy, Richardt Strauss and Mike Ross. With a lack of solidarity in the set-pieces, Glasgow were very short of possession for the first half and were thus on the defensive for long stretches. Their borderline defense was able to stop Leinster scoring tries, but they did cough up a number of penalties and have a man sent to the bin. 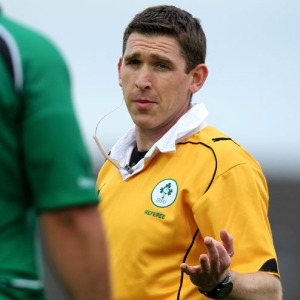 Bronson: nobody was happy with him. Glasgow fans felt that he was too hard on them at the breakdown, Leinster fans thought that he let way too much go unpunished. Sometimes you just can’t win.

There was no shortage of grousing from a vocal posse of Glasgow fans who felt that referee George Clancy had it in for them, but if you don’t have the ball and are always trying to slow-up the breakdown [be it by refusing to release the tackled player, or competing for the ball when you’re on the deck] you’re going to give away penalties. Leinster fans were none too happy with Clancy either, believing that Glasgow should have seen another man in the bin for repeated infringements during a staunch goal-line stand that saw multiple infractions of the laws. Poor Bronson simply can’t win.

With Leinster leading 12-3 with less than fifteen minutes to play, Isa Nacewa slipped around Alistair Kellock wide out with a beautiful shimmy and fed Dave Kearney for the winger to dive over in the corner. It was a little moment of magic from the fullback – not necessarily highlight reel stuff, but the sort of genius that Leinster fans have come to expect from the ringleted wonder.

Sexton’s perfectly struck touchline conversion sailed over, despite Bronson hassling him about the time it took to move the sponsor’s advertising pads and a tranche of cables. Sixteen points down with fewer minutes to play, and a lesser side than Glasgow might have felt that the game was up. However, the Weegies came on strong and scored two late, late tries to make the scoreboard a hell of a lot more respectable. All season long they’ve been a team who has played for the full eighty – their biggest loss was a 28-14 defeat to Ulster in Ravenhill in the first match of the campaign – and once again they went out on their shield.

Where Do The Two Teams Go From Here?

Brad Thorn: when the going gets tough, Thorn gets tougher

Leinster go on to face the hard-charging Ospreys in the final in two weeks time. This was a bloody tough game for them in the lead-up to their Heineken Cup final against Ulster, and while they didn’t come through unscathed, there are positives. Just like he did in the World Cup quarter-final against Argentina, Brad Thorn put in an enormous performance, getting on the ball far more than he has in previous games. He was The Mole’s Man of the Match by a distance. Devin Toner had a confident outing in a knock-out game against a class opposite number, and Dave Kearney continued his fine form on the wing. Locky McLaughlin and Heinke van der Merwe came off the bench and put in excellent displays, belting into the Glasgow defense and making a lot of hard yards, really putting themselves in contention for starting roles in next weekend’s final.

What of Glasgow? Their season is over, but they’ve made huge strides. This time last year, they finished second last in the table, conceding more than twice as many tries [48] as they did this season [23]. In 20-year old Duncan Weir, they’ve discovered a cracking outhalf, and fullback/centre Stuart Hogg is the most exciting backline prospect in Scottish rugby for many, many years. With Sean Lamont arriving from the Scarlets to join his oft-injured brother Rory, they’ll have much more ammunition for the next campaign.

Unfortunately, Richie Gray has made a bit of a head-scratcher of a move to Sale, and while Tom Ryder is a fine replacement, Gray is a marquee player. He’ll be the face of Scottish rugby for the next decade, and it’s a real shame that he won’t be playing his rugby in the country for the next three years. It would have been understandable if he’d been tempted to Toulon or Racing or Clermont or one of the other really big-spending French outfits … but Sale? More worrying still is the Townsend appointment. Scotland’s attack has been rubbish under his regime, and The Mole can’t see what else he brings to the table. Here’s hoping that all the good work Lineen has done isn’t negated.