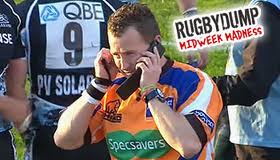 Rubber Ducky, are you there?

As an occasional listener to sports radio, I’m often surprised by how much complaining is done post-match about the refereeing decisions. The ref got this wrong, he got that wrong ad infinitum. Given that there are many games each weekend in many codes, this allows for the same conversation to play itself out for hours over the course of the season with the names changing and the conclusion staying constant: the decision is made, the result stands. “They can complain all they want but France are going to the World Cup. Get over it.”It’s not that this isn’t a discussion that people have, it’s the fact that producers allow so much time to be taken up talking about it. What a turn off – boring! The exception, as is so often the case, is Second Captains where it’s rarely a topic of discussion.

The Mole’s favourite way of thinking about officialdom’s role is summed up by this anecdote about three baseball umpires who were arguing about their job. Each called balls and strikes; each was bragging as to who did the best job. Said one: “I call them as I see them—and no one can do better than that.” The second retorted, “That’s nothing: I call them as they are.” The third paused a moment, and finally added: “They ain’t nothing until I call them—and then that’s what they are.”

In an effort to reduce the inconsistencies between calling them as they are and calling them as the ref saw them, rugby introduced the Television Match Official (TMO) aka “the telly ref” in 2001 to adjudicate upon try scoring decisions when the match official had some doubt. It wasn’t long before referees were going to the TMO for most tries and even then not even getting it right vis the case of Tommy Bowe against Scotland in 2012 which was accurately summarised by Neil F in this Ulster fans’ forum.

One of our first posts was about “Bronson” Clancy taking the law into his own hands and ruling on a forward pass from Jimmy Cowen to Izzy Dagg against SA in 2011. Bronson wasn’t allowed to use the technology this way but he did, he made the right call, and everyone seemed happy enough that justice had been served.

The referee’s mandate to call on the TMO was expanded on a trial basis in the 2012/13 season. This was probably a well meaning response to the precedent set by Clancy but smacks of the adage that “hard cases make bad laws”. This has had the effect of referees second guessing their own (lack of) decisions in the event of a “try” being scored but seems really inconsistent, mainly because the TMO is only called on when a touchdown has occurred. What about all the little infringements that don’t get blown because an official is temporarily unsighted but alter the course of a game? Should the TMO intercede and alert the referees to what he saw? How can you make that judgement? It also only applies in the direct build up to a try but what happens if there’s a forward pass inside the 22m that leads to a break of 60m+ metres and from a subsequent set piece a try is scored by the offending team? There are a number of examples that could be imagined and the net effect is that the referee is even more central to the game than ever.

This prominence increased during Paddy O’Brien’s tenure as the IRB Referee Manager and is an example of regulatory capture that is in danger of becoming the status quo.

Regulatory capture is “a form of political corruption that occurs when a regulatory agency, created to act in the public interest, instead advances the commercial or special concerns of interest groups that dominate the industry or sector it is charged with regulating.”

The increasingly prescriptive nature of the application of the law means that refs dictate the quality of a game to a greater degree than is healthy. The scrum engagement sequence is one example – different referees have different cadences and all of them like their little individual flourishes. The wording around tip tackles is another but the reliance on the TMO and the consequent delays while waiting to hear on some marginal call is too much.

O’Brien gave a quote upon appointment as IRB Referee Manager that embodies the inherent conflicts of interest when appointing a referee manager: “Rugby has been fantastic to me and I’m looking forward to the new challenge of building on the excellent work that has been done over the last few years, and ensuring ongoing consistency and excellence of performance in our match officials.” His objective was excellent performance from match officials – not that the game was enjoyable to play, fairly adjudicated and enjoyable to watch but that the ref’s performance could be graded by other referees. This is regulatory capture and it doesn’t help the game because the enjoyment of playing and watching a fair contest come second to the referees’ application of contradictory laws and use of technology for arbitrary decisions. Screw that! I’d little time for the telly ref before the trial application and consider it a pox on the game now. Please get rid of it IRB!

The SA v NZ game in the Rugby Championship was a super game and many of the comments in the aftermath were highly complementary of Nigel Owens’ officiating. Owens is in this correspondent’s opinion the best referee in the world and the one with the best feel for letting the game flow. It used be said that you knew a referee had done a good job when you didn’t notice him. That epithet is increasingly harder to earn because of the prominence given to the officials. It must be hoped that the TMO’s role is reduced at the end of its trial period.

22 thoughts on “The Man in the Middle”