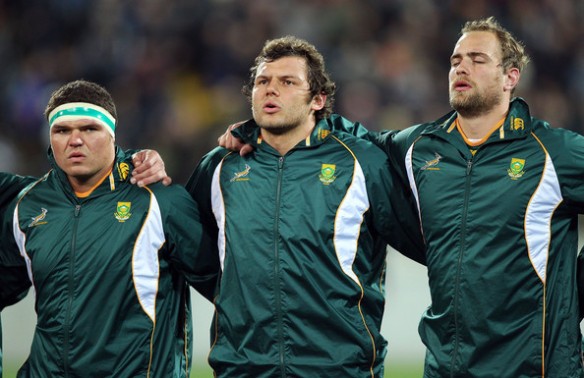 Name the Boks! All three of these players STARTED against New Zealand in Wellington in the 2011 Tri-Nations Test.

Dexy’s [relatively] recent article in the Irish Times made the point that “… Ireland have used 46 players in their 17 Tests in this unrelenting [2011-12] season. As this tour underlined in abundance, Ireland don’t have 46 Test players.”

Ireland have actually used 47 players in tests over the season. That’s not a particular dig at Dexy’s, it’s just that in looking up who played which games, and which player played the most games in each position, I came up with a different number.

* designates that the player has now retired from test rugby

Very few teams in the world have 46/47 test players. New Zealand probably have; France, maybe … although Irish fans have a tendency to over-rate French players. South Africa? There’s supposedly a queue for the jersey that stretches beyond the horizon in every position of South African rugby, but you look at the results from Tri Nations 2011 [when Crazy Piet rested the bulk of his first-choice players for the first two games in order to concentrate on a World Cup-oriented strength and conditioning program] and you see a team full of pretty ordinary players who took some serious thumpings. Wynand Olivier has 37 Bok caps, and he’s little more than a deftly layered haircut and some platinum blond #6 highlights.

If England had 46 test players, they wouldn’t be sneaking away wins in Scotland and Italy with opportunist tries from Chargedown Charlie Hodgson. Australia’s second string went down to Thomond Park in November 2010, less than 20 months ago, and were beaten by a Munster team who were at best half-strength; Munster were missing O’Connell, O’Callaghan, O’Driscoll, Ryan, Hayes, Horan, Flannery, Wallace, Leamy, Quinlan, O’Leary, Mafi and O’Gara, who were all contracted at the time. A half-strength Aussie team got beaten by Scotland in Newcastle at the beginning of June.

Martin Scelzo, Mario Ledesman and Rodrigo Roncero: they’ve seen eleven World Cup tournaments between them. Despite the calibre of their replacements in terms of ability on the field, those lads have left a gaping hole in the Pumas side.

Argentina have relied on the same spine of players to an even greater degree than Ireland have: Ledesma, Scelzo, Contepomi and Pichot all went to four World Cups – which means twelve years of international rugby, no matter what way you cut it – and Nacho Corleto, Rodrigo Roncera, Pato Albacete, Nacho Fernandez Lobbe, Lucas Ostiglia, Gonzalo Longo and Nico Fernandez Miranda all went to three. Their strength in depth is going to be severely tested by their debut in the augmented Tri Nations [“The Rugby Championship” is a nauseatingly faux-auspicious moniker], and while they’ll add a great deal to the tournament in terms of aggression and bravery and patriotism at anthem time, The Mole is sure that they’ll be in pieces by the end of it.

And Wales? Wales just lost three straight games to Australia, having lost another two earlier in the season: neutral territory, at home, away, tournament, friendly or test series, they haven’t managed even one win in five attempts.

Between their first and second tests in the recent series, they made four changes: the injured Scott Williams [face] and Toby Faletau [thumb] were replaced with Ashley Beck and Ryan Jones respectively, while Matthew Rees replaced Ken Owens at hooker and Alun-Wyn Jones replaced Luke Charteris in the row. They lost the next one as well, but didn’t change a single member of the starting team. Over the whole series, they only made two unforced changes in selection, despite the fact that they eminently fancied a series win before departing for Australia. So, looking at those selections and results, you’d have to say that their coaches don’t necessarily feel that there are plenty of Welsh players around the fringes of the team battering down the door to get in: if there were, why wouldn’t they change some faces after four losses in one season to the same opposition? 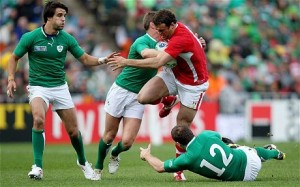 Jamie Roberts plows a furrow through the Irish midfield in the RWC11 quarter-final. Take the Big Bopper out of the Welsh line-up and a whole heap of their attacking threat goes up in smoke. Wales faced an Australia side missing captain James Horwill, Quade Cooper, James O’Connor, Drew Mitchell and [for two out of three tests] Kurtley ‘Curly Bill’ Beale – and that doesn’t include notable scratches from RWC11 like Rocky Elsom and Dan Vickerman, or outstanding players plying their trade in France like George Smith and Matt Giteau [and Luke Burgess, who’s not quite of the same calibre but is still a handy player]. Even then, they couldn’t get a one win from three attempts … and most Australians wouldn’t claim to have 46 test players either.

The Welsh deserve credit for getting to the semi-final of RWC11 and winning a Grand Slam on the back of that, but take two players out of the team – Jamie Roberts and Shane Williams, but Roberts especially – and their attacking gameplan doesn’t work particularly well. That the Welsh have good depth in a 30-man squad is largely due to Gatland’s belief in competition for places inspiring performances, but they no more have 46 test players than Ireland have. Josh Turnbull? Aaron Shingler? Ken Owens? Rhys Gill? Aled Brew?

Can Ireland match New Zealand for depth? Not a chance. Are all test matches played at the standard that New Zealand set? No.

* For the record, the Boks in the title image are Werner Kruger [tighthead], Alistair Hargreaves [lock] and Gerhard Mostert [lock].