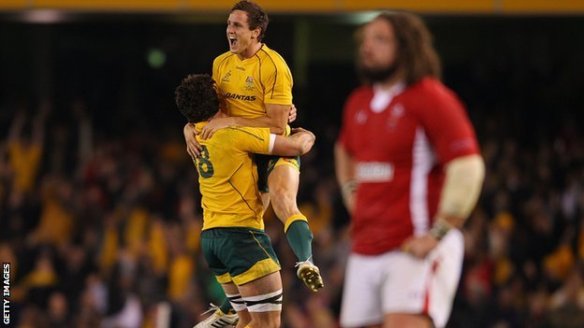 David Harris celebrates with Dave Dennis; Adam Jones is gutted. Losing in the last minute has a taste all of its own, and both Welsh and Irish players reacquainted themselves with it at the weekend.

Of all the northern hemisphere teams touring southern hemisphere countries, Wales were the most confident. A number of factors were stacked in their favour: their players are well rested, due to the Welsh clubs’ lack of success in European competition [even those players based in France like Mike Phillips and James Hook had no involvement in the business end of the Top 14]; they had an almost entirely injury-free squad, with the notable exception of Big Bopper Jamie Roberts; and they were Grand Slam champions. They should have represented the Six Nations teams’ best chance of a series victory against an injury-ravaged Australia. Instead, they haven’t even been able to take the series to a third test.

Australia were stripped of five of their best players: second row and captain James Horwill, play-making outhalf Quade Cooper, IRB International Player of the Year nominee Kurtley Beale, free-scoring winger Drew Mitchell and hot-tempered larrikin James O’Connor. Their Super Rugby teams have been a long way off the pace set by the Chiefs and the Stormers, and have been playing some genuinely turgid rugby. An experimental side had been turned over in horrendous conditions in Newcastle by unfancied Scotland in the first test of the Wallabies’ season five days before the series opened against Wales, and coach Robbie Deans has been under sustained pressure ever since the RWC11 loss to Ireland.

The Wallabies rode a magnificent, Man of the Match performance from scrum-half Will Genia to victory in the first test, and despite the Welsh opening the scoring in the second test with a very early try from George North, the Australians absolutely owned the ball for the first half, taking 69% of possession. The much anticipated duel between opensides Pocock and Warburton was a rout, with the Australian captain dominating the breakdown and his Welsh opposite number getting skinned by Waratah’s outhalf Berrick Barnes in the middle of the pitch for Rob Horne’s half-ending try.

Plenty more of this sort of thing required. Matthew Rees’ poor throwing contributed heavily to Wales’ lack of possession in the first half.

As Ireland discovered in Twickenham, your set-pieces are often taken for granted until they misfire. In Ireland’s case, it was the scrum, and in Wales’ case, it was very obviously the lineout. Without Luke Charteris starting in the second row, and with Matthew Rees installed at hooker, the Welsh lineout is a liability. Rees doesn’t bring a lot else to the party, and it’s a bit mystifying that he is such a favourite of Gatland and Howley. Richard Hibbard is a more damaging runner and an aggressive scrummager [but no master of the oche himself], and the injured Huw Bennett a more consistent thrower – not difficult – and a workaholic around the pitch. Rees is neither a hard-hitting ball-carrier, nor a breakdown menace, nor even a competent thrower – what’s so special about him?

The lack of a functioning lineout hurt Wales far more than they might have expected. One of their go-to moves in both RWC11 and the 2012 Six Nations was a long flat pass to a charging Jamie Roberts in midfield, often off tail ball. Rees struggled to get even banker ball at the front.

Roberts was outstanding during September and October in New Zealand, vying with Ma’a Nonu to be the most dangerous midfield threat in international rugby. His absence from the summer test series might hurt his chances, but he really deserves a nomination for IRB International Player of the Year on the back of the two tournaments in which he featured this season.

Roberts causes midfield carnage against every team he faces, and when he’s not there, Wales aren’t the same team.

So much of Wales’ good work stems from Roberts busting into midfield at full pace, skittling tacklers, getting over the gainline, sucking extra men in and forcing the defense on to the backfoot. As Ireland know to their cost, he’s also an excellent kick-chaser, especially in the first half when he’s fresh.

With no Roberts outside him, Rhys Priestland looks like a very ordinary player. Normally his job is just to pass the ball out in front of the Bopper [which he does well] or kick a steepler for his enormous three-quarters to chase. Defences know the threat that Roberts poses, so they’ll often slide off Priestland and give him a bit of space to run, which makes him look more threatening than he should with ball in hand. The Mole’ s opinion on Priestland is hardening on a month-by-month basis: the real Rhys Priestland is the guy who blows hot and cold for Llanelli on a weekly basis, not the guy who Jamie Roberts carries for Wales. 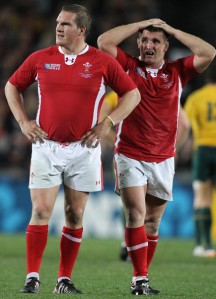 To quote Indiana Jones: “It’s not the years, honey – it’s the mileage.” Gethin Jenkins has played four tests against Australia this season and lost every one of them, but Saturday’s game will have shown some worrying signs to Welsh fans. Normally such a presence around the pitch, he had the lowest tackle count in the Welsh pack and didn’t carry the pill once.

Age Is A Tireless Hunter

The Mole can’t recall Gethin Jenkins having such a poor game. Jenkins had a cracking Six Nations, but looked old and tired against Australia on Saturday. At 31 years old, he should be in his prime as a prop, but he has a lot of miles on the clock, having debuted a decade ago and played 94 tests [including five for the British and Irish Lions] in the interim.

He struggled at scrumtime against the not-particularly-rated Sekope Kepu, and in contrast to his form in February and March, he was nowhere at the breakdown. He wasn’t involved in the midweek game against the Brumbies and while he has played in thirteen tests for Wales since September, he’s only featured in eleven games for Cardiff this season. That’s twenty-four games in ten months, so he’s hardly overplayed, especially when you consider that he has only played five games since March.

Jenkins normally chips in with quite a number of close-in runs, and without those, Wales were a bit short of go-forward. Adam Jones simply isn’t a factor with ball in hand, and Rees adds nothing special. He’ll take the ball on, but he rarely breaks tackles or gets the ball out of contact.

Dan Lydiate is as destructive a tackler as there is in international rugby, but he strangely doesn’t bring much to the table as a ball carrier. He’s big and strong, but if you look over his games in the Six Nations [when he was Player of the Tournament], you won’t see any big highlight reel runs to rival Stephen Ferris, Dave Denton or Tom Croft. He’s like a Kev McLaughlin Plus: tackles well and runs head-down into contact at the fringes. Sam Warburton is not a particularly big carrier – and was off the pace in this game – so it put a lot of emphasis on Ryan and Alun-Wyn Jones to get go-forward. While both played quite well, neither of them were able to really punch holes on even a semi-regular basis.

With Warburton getting nilled at the breakdown and their lineout a source of woe rather than clean ball, the Welsh simply didn’t have much ball and weren’t able to get either of their huge wings into the game often enough. Priestland didn’t opt for cross kicks to exploit the height advantage of his outside men, even when ex-mungo winger Cooper Vuna was sinbinned for his idiotic challenge on Lee Halfpenny.

Wales will rue the post-hooter placekick that gave them no time to recover, but Berrick Barnes had an easy chance to put the Australians ahead with six minutes to go and badly pulled his kick left. He had been playing through an injury, and it looked like it hampered his swing; he was pulled off the pitch immediately, with Mike Harris coming on.

Barnes skins Warburton on the way to setting up Rob Horne’s try. While Genia stole the show in the first test, BB’s return to form as a test-quality outhalf might have been the biggest positive from the first two games to Aussie coach Robbie Deans.

Barnes has had a fine series, and his game-management style of outhalfing offers a viable alternative to Quade Cooper’s gunslinging approach. Cooper is an audacious passer and sees opportunities which only he can take advantage of, but Barnes’ tactical kicking allows the Australians to play a more structured game. It’s not like he’s a boring or predictable player; his midfield break to set up Rob Horne’s try was positively electric.

Barnes doesn’t have an entirely happy history in the No10 jersey. He was drafted into the Australian RWC07 squad for his test debut at 21 years old, and the quarter-final against England in that tournament was just his fourth test. Having been pushed between first and second five-eighth since then, he somewhat struggled to coexist first with Matt Giteau and then with Cooper. He’s only 26 years old though, and it could well be that the continued run at outhalf with the Waratahs – even though they’ve been poor – has brought him into something like his best form. Having recently become a father [it was mentioned the odd time in commentary] the increase in maturity and responsibility that he showed on the field is an easy tie-in.

Wales won’t go back to the drawing board. Gatland has established a pattern that works, but it’s hugely reliant on Jamie Roberts, and while Ashley Beck has the skills and the build to be a decent stand-in, it’s incredibly difficult to replace world class players … that’s why they’re world class. They do things that other people simply can’t do.

He’ll need to re-instate a lineout-first second row like Luke Charteris or Ian Evans, which may hurt their scrum – but the personnel options are there. Bradley Davies is a bit of a penalty magnet in any case.

There are still huge questions over Rhys Priestland at outhalf. James Hook is more talented, but The Mole reckons that his propensity to freelance hurts his chance of selection. Dan Biggar looks far less flakey than Priestland and has the same sort of megaboot out of hand [as well as a nerveless place-kicking record], so it seems odd that he’s not rated by the current coaching staff.

Looking Forward To The Lions

Before these tours, The Mole was very confident of the chances of the Lions in next summer’s tour of Australia. As Ireland showed at RWC11, the Australian scrum is a set-piece you can target, and while Quade Cooper is a breath-takingly exciting attacker, he’s a piss-poor defender and a flaky place-kicker. However, the return of Ben Robinson to the loosehead side and a serious return to form by Tatafu Polota-Nau has shored up the Wallaby front row. Wycliffe Palu’s ball-carrying heft at No8 and the hard edge that Scott Higginbotham has brought to the blindside since Rocky Elsom’s decline complement the outstanding Pocock at openside and form a prototypical backrow unit.

However, the Wallabies have won this series before the third test with essentially a second-choice backline. Luminous talents like Cooper, Beale, O’Connor and Mitchell will make them an entirely more dangerous attacking threat, and in their absence Deans has built good depth without hurting the win/loss record.