Steve Hansen, NZ head coach: he’s been around the set-up for a long time, and he has previous experience as an international head coach with Wales. With so much emphasis on the All Blacks winning their home World Cup, there was always going to be an odd honeymoon period afterwards once they took the William Webb Ellis trophy, but his first squad is a bit of a shake-up.

The New Zealand All Blacks have picked a 35-strong training squad to prepare for the forthcoming visit of Ireland for a three match test series in June, and it’s pretty interesting to see the turnover of personnel since their victorious World Cup.

With the recently-knighted Graham Henry out of the hot seat after eight years, there was always bound to be a few changes. Even though new head coach Steve Hansen was a long-time assistant of Henry’s – and followed a similar career path in some respects, in that he did a stint as head coach of Wales – he’ll want to put his own stamp on things. Here’s a review of the RWC11 squad, and below is the recently announced training squad:

Bullish Crusaders centre Robbie Fruean is the most obvious omission. On current form, The Mole things he’d start for any other XV in test rugby, but sometimes that’s just not good enough for the Kiwis. Former All Black and Samoan centre Frank Bunce [one of the very best centers of the 1990s] thinks he’s still a bit inconsistent: 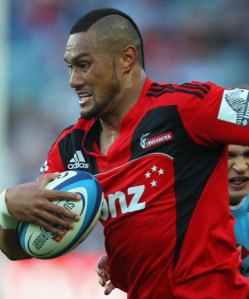 Robbie Fruean is unfortunate to miss out, especially so given that Richard Kahui [who was named in the squad] is injured. Having missed out on selection for the RWC11 squad as well, one wonders what it is that Hansen sees in him and doesn’t like.

“He is certainly explosive and strong and has all the ability – but the one thing I would ask him for is a bit more consistency,” Bunce said yesterday.

“You can’t doubt he was the star against the Waratahs but you need to put together those performances, or something very similar, together on a consistent basis to really turn the heads of the All Blacks selectors. The last thing a coach wants is to see him on fire one week and then not see him the next.”

There are too many good New Zealand players in Super Rugby to go through who has been left out one-by-one, so The Mole will restrict himself to those who were part of the RWC11 squad but aren’t included this time around.

John Afoa [28, prop] – Afoa has been a huge success since moving to Ulster. He’s the cornerstone of their scrum and brings the excellent basic skills – hard tackling, sure handling, straight running and good decision-making – that Northern Hemisphere rugby fans have come to associate with All Blacks.

Corey Flynn [31, hooker] – Corey Flynn is still lining out for the Crusaders and has simply been omitted from the training panel. With only two hookers included [Mealamu and Hore, both of whom were also in the RWC11 squad and both of whom are older than him], it’s a vote of no confidence from the new management.

Brad Thorn [37, lock] – the legendary tighthead lock will line up for Leinster in both the Heineken Cup and the Pro12 final over the next fortnight. Having retired from international rugby after the World Cup, he went straight to Japan for a spell with the Sanix Blues before arriving in Leinster in March on a three-month deal. Thorn looks like he has been trying to play as much rugby as he can as he nears the end of his magnificent 19-year dual code professional career, and he’s still going strong.

Anthony Boric [28, lock] – the Blues man was invalided out of his side’s mini-tour to South Africa in March after suffering a neck injury against the Bulls.

Jerome Kaino [28, blindside] – the standout blindside of RWC11 confirmed in late March that he’s taking up a lucrative two year deal in Japan with Toyota. He hopes to return to New Zealand after that and try to win back his jersey for RWC15 in England.

Jimmy Cowan [30, scrum-half] – 30 year old Cowan has slipped down the ranks at the Highlanders behind Aaron Smith and will be joining Gloucester for the 2012-13 season.

Colin Slade suffered a serious but clean break of the leg in March against the Chiefs. He’s had a run of bad luck since being called into the World Cup squad as Dan Carter’s back-up, and it’s hard not to feel sorry for the talented young outhalf.

Colin Slade [24, outhalf] – the luckless Highlander broke his fibula and tibula against the Waikato Chiefs in March and is unavailable for selection for the rest of the year.

Isaia Toeava [26, utility back] – like fellow Blues man Boric, Toeava is out injured and will likely require surgery. He has had serious problems with a hip condition for the last three seasons.

Zac Guildford [23, wing] – despite playing some sharp rugby for the Crusaders alongside Israel Dagg and fellow omittee Fruean, Zac Guildford doesn’t make a squad that is strangely light on wingers. He had some well-documented drinking problems during the World Cup and it might be that the coaching team is leaving him out of the spotlight to let him get his personal life back on an even keel.

Mils Muliaina [31, fullback] – the 31-year old All Black centurion and long-time Chiefs captain has retired from international rugby and is currently plying his trade in Japan.

World Cup squads were 30-strong, and there are ten players who were part of the All Blacks successful effort that are now out of the picture. That’s a big turnover. There are so many good new players coming into professional rugby in New Zealand every year that there’s always been a high attrition rate.