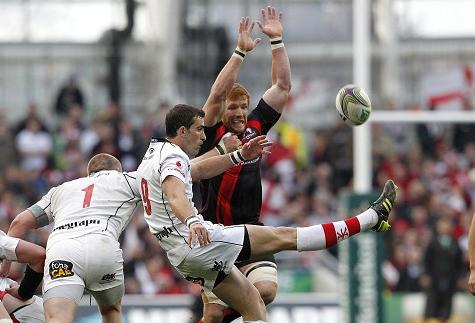 Ruan Pienaar was the Magner's League Player of the Season in his first term with Ulster, and was in a different class than everybody else on the Lansdowne Road pitch.

Ulster and Edinburgh played out a fast-paced semi-final in front of their boisterous supporters, and while the end-game wasn’t quite as tense as the final score would suggest, everyone in Lansdowne Road got their money’s worth.

Edinburgh’s consolation score was entirely deserved and it must have been bitterly disappointing for their fans that the passes only stuck in the last minute when the game had already slipped from their grasp. They played with more invention than their opponents on the day, but too often let themselves down with handling errors or lapses in concentration. Ulster were far less wasteful, and in Ruan Pienaar they had a match-winner par excellence. Without him, Ulster simply wouldn’t have won this game.

Paddy Jackson didn't shy away from the physical stuff, and is probably a tougher tackler than Ian Humphreys, the man he replaced, but this is the second knockout game in a row where the Ulster outhalf was a bystander.

Paddy Wallace continued his fine run of games in the No12 jersey, shepherding youngster Paddy Jackson through his first Heineken Cup start effectively. Brian McLaughlin’s selection of Jackson in the No10 jersey didn’t strictly backfire – Ulster won the game, after all – but he was the next thing to anonymous. That’s a harsh call on a young player who undoubtedly will benefit from the experience [and will also benefit from McLaughlin keeping faith with him for the entire eighty minutes], but this is big boy school. Greig Laidlaw absolutely ran Edinburgh’s attack and was a huge contributor in defense, while Jackson was just on the pitch.

Chris Henry was also badly missed in the No7 jersey. Willie Faloon struggled quite badly against Ross Rennie in the battle of the opensides, and The Mole thought that he could have been called ashore earlier for Robbie Diack; obviously Ferris’s knees are an issue, and the Ulster management didn’t want to make a premature call. Faloon isn’t a bad player by any means, but people want him to be better than he is, because even half-awake Irish fans will have noticed during the World Cup how big an effect a good openside can have on a game.

With all that said – most of it negative! – about two of the three changes in the starting lineup from the quarter-final against Munster, the one change that had prompted most column inches in the build-up – the recently-returned Declan Fitzpatrick for the suspended All Black World Cup-winner John Afoa at tighthead – went without a hitch. Fitzpatrick more than held his own against the vastly experienced Scottish international Allen Jacobsen, and the Ulster scrum were able to milk the Edinburgh eight for points throughout the match. Fitzpatrick can’t do what Afoa does around the park, but his efforts at scrum-time alone will earn him a place in the hearts of every Ulster fan who was at Lansdowne Road.

While Pienaar was the class act on the pitch, he was ably assisted with strong performances from his South African compatriots. Pedrie Wannenburg bagged a somewhat fortunate try that the dominance of the Ulster scrum probably deserved, and Johann Muller did what he has been doing since he arrived in Ireland: won lineout ball, made tackles, hit rucks and got on famously with the referee. He’s a real natural as captain, combining authority with an even temper. 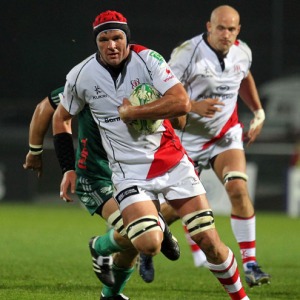 Johann Muller brings the gravitas of a Springbok captain to every game in which he plays. While it's something of an intangible compared to the rewards that Ruan Pienaar's goal-kicking brings, it's arguably as important a part of the soup. He had his early brush with Chunk Jacobsen, but was otherwise able to keep his head clear and to keep Romain Poite on his side.

On the other hand, Stefan Terblanche’s temper let him down when he was yellow-carded for clipping Edinburgh hooker Ross Ford with an open-hand shot late in the first half; he probably didn’t deserve that censure, although Stephen Ferris did when he slapped down an Edinburgh pass close to the Ulster line five minutes later.

Romain Poite’s refereeing seemed a little uneven throughout the match, with no consistent ruling on the breakdown. It wasn’t his finest day, but it’d be wrong to pin the number of errors on him. Neither team turned in the performance of which they are capable.

Ulster have played distinctly better than this in the competition, notably in their 41-7 monstering of Leicester in Ravenhill. Their attack badly lacked invention, which largely stemmed from the inexperience and nervousness of their No10. In trying not to do too much, he arguably did too little. Their defense wasn’t at the same feverish intensity as it was in Thomond Park, either – tackles were missed from the off, and the bigger pitch at Lansdowne Road seemed to suck the energy out of the Ulster players’ legs.

Edinburgh didn’t go into their shell, but played the high-tempo, pass-before-contact game that got them to this stage of the competition. They made a significant number of errors, quite a few of them under little immediate pressure. Ulster played the big moments like a team with knockout experience whereas the Scots got a bit of vertigo from the sixty minute mark. Both teams missed opportunities but Ulster always felt in control, even when their deficit was cut to a point. Edinburgh’s Fijian talisman Netani Talei had an error-ridden game whilst still posing a threat, and the battle between Stephen Ferris and Dave Denton was entertaining and full of effort but lacked crisp technical work. 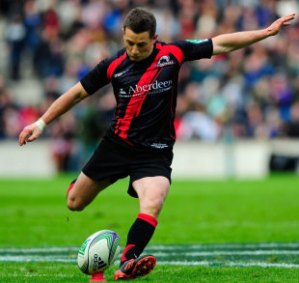 Laidlaw had an exceptional game – his attacking instincts, his ball-robbing and his place-kicking were all out of the top drawer.

Usually when your opposite number wins the Man of the Match award you’ve had a bad day at the office, but Mike Blair upset the convention by having a fine game in Edinburgh colours. He couldn’t do for his team what Pienaar was able to do for Ulster, but he was a vital player in his team’s ambitious game plan with his pace off the mark and accurate distribution. His quick feet made him a consistent threat around the fringes – especially with Chris Henry absent – and he was almost entirely error free over the eighty minutes. He and Greig Laidlaw dictated the pace of the game, with Laidlaw’s nerveless kicking keeping Edinburgh in touch for the majority of the eighty minutes. However, there was no shortage of alligator-arms and butter-fingers from his team-mates, and Edinburgh’s biggest problem was not being able to turn their possession into points. The Mole would have liked to see Laidlaw sit back and take a drop goal when Terblanche was in the sin-bin and Edinburgh were stuck in the Ulster 22 and short of ideas, but that’s the experience gap … they pressed for a try, and it didn’t come off.