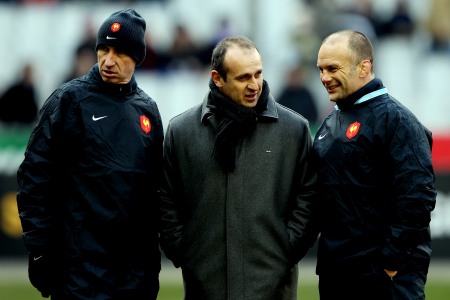 The three amigos of the new French coaching set-up. Their players haven't given them what they've been looking for, but what are they giving the players?

The Mole was more than a little surprised when Philippe Saint André was announced as France’s next coach before RWC11. Despite the fact that France came as near as you can feasibly come to winning the trophy as you can get without actually winning it, the Lievremont era had degenerated into farce, and it was clear that the next coach had to be less volatile, more media savvy and more experienced.

PSA is all of these things, but so too is Fabien Galthié. However, from the outside looking in, Saint André is more of a ‘company man’ than the Montpellier coach, a man who could be relied upon not to cause enormous headaches by the FFR.

Never trust a coach who preaches a different game than he plays ... or some other faux-profound bullshit like that.

Saint André was a phenomenal player in his day: instinctive, audacious, hugely skillful and full to the brim with on-field knowledge. He won 69 caps for France – and was captain for no fewer than 34 of those games – and scored 32 test tries. With Martin Johnson messily disposed of by England in the aftermath of the media disaster that was their World Cup, Saint André has become the international manager with the highest level of professional playing experience under his belt, but as of yet he doesn’t seem to have made that experience, that link with the players under him, count.

Being a great player has very little to do with being a great coach; here at Mole Towers, we’ve used the analogy before of a great pilot not necessarily making a great airline CEO . However, PSA isn’t Martin Johnson, parachuted into the top job with no experience of what’s required: he’s coached four high-profile teams in two strong leagues over the last thirteen years [Gloucester from 1998 to 2002; Bourgoin from 2002-2004; Sale from 2004 to 2009 and Toulon from 2009 to 2011].

He’s in a fix at the moment with a French team who look jaded and uninspired. While they were very close to winning a World Cup under Lievremont, they almost fell into it, and there has been precious little carry-through from that tournament. Looking over his record, is Saint André the right man for the job? What can he bring to a team that needs significant work in order to have them play at least like a team that is the sum of their parts?

Saint André finished his playing career with two seasons at Kingsholm [1997-99], and stepped neatly into the coach’s job, taking Gloucester to a third place finish in the league in the 1999-2000 season; to put that in perspective, they had finished tenth in 1998-99. That third-place finishing spot qualified them for entry into the Heineken Cup the next season [2000-01], and they were unlucky not to reach the final, being narrowly beaten by Leicester 19-15 in Vicarage road in the semi-final. Unfortunately their league form deteriorated during the run, and they failed to qualify for the next edition of the cup, finishing seventh in the league.

The Bougoin Years – A Pack That Drove France For A Decade 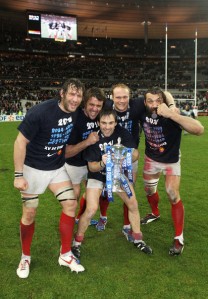 The Bourgoin Old Boys with the Six Nations trophy, 2010: Parra came to the club long after Philippe Saint-André had left, but Bourgoin were a huge influence in the French pack for the entire decade. 26-times capped Julien Pierre joined in 2003-04, PSA's last season as coach, and stayed until 2008, when he moved to ASM Clermont Auvergne.

When Saint André took over at CS Bourgoin-Jallieu, their pack featured Olivier Milloud, Lionel Nallet, Pascal Papé, Julien Bonnaire and Sébastien Chabal – five players who would go on to accumulate 299 French caps between them, with Bonnaire and Papé still very much in the reckoning for a few more. In his first season as coach [2002-03] they had their most successful season at European level, winning four of their six group games in the Heineken Cup but unfortunately not progressing to the knock-out stages.

The French league was composed of a Top 16 and divided into two pools that season, with four qualifiers from each pool of eight making it into a series of play-offs, which then gave way to two semi-finals and the traditional early-June Final. Bourgoin finished third in their pool, missing out on the semis but guaranteeing entry for the 2003-04 Heineken Cup.

In 2003-04, they finished top in their initial group of eight and second in the Poule A playoff group, proceeding to a semi-final against Stade Francais, where the eventual champions beat them 21-31on neutral ground in Lyon’s Stade de Gerland. Unfortuntely, they could only register one win in their HEC group of Munster, Gloucester and Treviso, winning the home tie against the Italians. These results should be viewed against a background of significant turmoil at the club: Saint André had been approached about taking over as Welsh coach, admitted that he was interested, and was sacked by the club in January 2004.

Back Over The Channel, As Though ‘Twere The Plantagenet Era 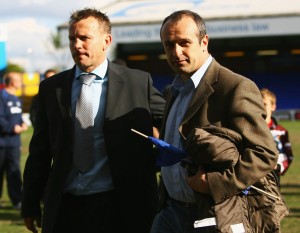 Sale Sharks Head Coach Kingsley Jones with Director of Rugby Philippe Saint André; enormous premiership knot, model's own. Saint-André had some smashing players to work with at Sale, and one of them he brought with him from his last job: Sebastien Chabal. However, it wasn't all Seabass, local boys Jason Robinson and Charlie Hodge-podge had huge seasons for the northerners.

Taking over as Director of Rugby at Sale in time for the 2004-05 season, the resurgent Sharks finished third in the Premiership that season and added the European Challenge Cup to the trophy cabinet [thrashing Connacht 59-9 in the semi-final and Paul 27-3 in the final] before coming out top of the pile in 2005-06 with a very well-received 45-20 thrashing of Leicester in the final at Twickenham. They made it to the quarter finals of the Heineken Cup that year, before losing 6-11 to Biarritz in a typically gruesome home quarter-final victory for the Basques.

A massive slump followed, with Sale collapsing to tenth in the league the following season. They were well clear of any relegation battles, but it was an enormous fall from grace for the reigning champions, winning just 8 of their 22 matches. They failed to qualify from their pool in the Heineken Cup, managing a double over Calvisano and a home win over Stade Francais, but losing the away tie to the French team and both fixtures to the Ospreys.

The following season [2007-08] saw them make a return to respectability, with a mid-table finish of fifth and 14 of 22 matches won; they made it to the semi-final of the European Challenge Cup, but were handily beaten [36-14] by Bath at The Rec. They managed to maintain their fifth place position in the league in Saint André’s last season with the club, and stunningly laid an absolute whipping on ASM Clermont Auvergne in the Marcel Michelin, running out 32-15 winners in the first game of their HEC pool. Unfortunately, they managed to lose their next game, a home fixture to Munster, and couldn’t make it over the line in Montauban, going down 12-16 away from home. 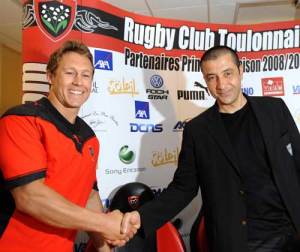 There were two key figures at the club during Saint Andrés time at RC Toulon, and guess what? He wasn't one of them.

Mourad Boudjellal brought Saint André to Toulon for the 2009-10 season as part of his self-financed attempt to take his hometown club back to the top of French rugby – where he felt it rightfully belonged. Saint André was given the title of ‘Sporting President’ and walked into a dressing room absolutely loaded with highly-payed foreign superstars – Jonny Wilkinson, Sonny-Bill Williams, Felipe Contepomi, Joe van Niekerk, Juan Fernandez Lobbe and Tana Umaga to name just a few.

Boudjellal realized that he needed a proper coach [having persisted with Umaga as a player-coach in 2008-09] and without too much ado about anything – apart from the absolute love-affair that the entire French league had with le Jonny – Saint André took the team that his boss had assembled to second place in the regular season of the Top 14 and a semi-final against ASM Clermont Auvergne in Saint-Etienne, which they narrowly lost 35-29 in a cracking, extra-time-fuelled rugby bonanza of a game. They were also pipped at the post in the European Challenge Cup Final by the Cardiff Blues, losing 28-21 in another belter of a game.

His second season in charge was less successful on the domestic front, Toulon finishing a lowly eighth in the Top 14 and outside the qualification spots for the next season’s Heineken Cup. However, that season’s Heineken Cup was a raucous campaign which featured an absolute thumping of European heavyweights Munster at the Felix Mayol, as well as an electric quarter-final against Perpignan in front of 55,000 Catalans at the Olympic stadium in Barcelona.

The Toughest Job In World Rugby?

Since his announcement as coach-in-waiting, Saint André has been assembling his team of assistants. Forwards coach Yannick Bru has proved himself at Toulouse under Guy Noves; unfortunately the “Bayonne Express” Patrice Lagisquet is an example of the maxim that you should never meet your heroes, or watch teams that they coach. Lagisquet had some excellent players playing absolutely turgid shite at Biarritz, and if you were going to pick a coach on the basis of how his team played, the former wing great would be about the last person in the Top 14 to whom you’d look. You never know the full story about personal friendships though: Saint André and Lagisquet were team-mates for a number of years at international level, are from the same generation, played the same position and could see the game exactly the same way.

The French job is a tough one. It could be the most demanding rugby job in the world, including the All Blacks post. Because of the language barrier, English-speaking people never really get the subtleties and intrigues that surround the post. You’ve got an enormously powerful league that has to be negotiated with, and there’s a certain amount of political pressure from the very top, as Sarkozy’s presence at matches has made explicit.

Furthermore, you can only get fifteen players on the pitch at a time. There’s almost certainly more depth in French rugby than in any other country in the Six Nations – and you get the feeling that a well-coached French ‘second-string’ would do pretty well in the tournament – but in a tournament that [normally] allows for adequate rest periods between matches, and in which each team only has five fixtures in any case, great depth isn’t all that useful to you. You need coherency above all else. Unity and single-mindedness also come in to play, but it is coherency, time together on the training pitch and the feeling of playing for one another – not just ‘for France’ – that seems to be missing.

The demands of the Top14 actively damage the ability of a coach to gather together his team in the manner that Declan Kidney is able to do in Ireland or Warren Gatland in Wales.  That doesn’t dampen the expectations of the French rugby public, but it will prove to be a significant barrier to Saint André as he continues his new role.