Morrison has Tommy Bowe pinned for the one-two-three! Whatchu gonna do when Hulkamania runs wild on you, brutha?

This was an oddly splintered sort of match, which suffered quite badly from the spectator’s point of view from innumerable breaks in play. The Mole doesn’t want to belittle the injury suffered by Scottish winger Lee Jones in a clash of heads with Andrew Trimble; while that provided for the longest delay, it was a fair and correct call from referee Pollock in order to safeguard the health of the player.

However, there seemed to be a huge number of stoppages and delays, and there was far too much stalling at scrum-time. Ireland in particular were guilty of grinding the pace down to a crawl at every scrum, the back five standing around for what seemed like ages before engaging with their front row. Watching at home on television, you don’t get the same feel for the tempo of the game: all the delays and pauses are used constructively to show replays of compelling incidents, or the actions that prompted a referee’s decision. In the stadium, there’s just a lot of standing around waiting for things. This wasn’t a particularly fast-paced match in the first place, and all the stoppages and delays drew it out to just a couple of minutes short of two hours from whistle to whistle.

Scotland came over with their fans in confident mood after an exciting performance against the French in Murrayfield, and their hopes were boosted with the late news that Ireland would be missing not just Paul O’Connell and Conor Murray, but Sean O’Brien too. By the end of the game, however, they looked a disjointed mess, the momentum from the French game thoroughly dissipated; wasted, even. Their scrum had given up the ghost and their much-vaunted [and to this point spectacularly successful] lineout had been upset by a patchwork Irish unit missing their best jumper. 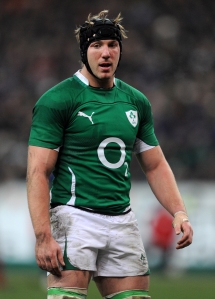 Stephen Ferris has been the monster in Ireland's defense. O'Brien's best work as a blindside in last year's tournament came with ball in hand, whereas many of the highlights of Ferris' outings this year have come when the other team have the pill.

The Scots made some unforced errors, but they were also put under significant pressure in open play as well as the set-piece. Stephen Ferris was not just destructive but industrious in defense, his seventeen tackles one short of matching the tackle-count of the entire Irish front-five. While he would have been a shoo-in for The Mole’s Man of the Match, eventual winner Donnacha Ryan was a legitimate call. Aside from one costly knock-on in contact which turned over possession cheaply and allowed Ross Rennie to send a long kick deep into the Irish 22, Ryan had a very smart first start in the Six Nations: the Irish scrum was pretty solid, and as the game progressed his aerial work – which I’ll hold my hand up to doubting before kick-off – was very good.

His performance throws Declan Kidney’s continual persistence with Donncha O’Callaghan under a far harsher light. A majority of Irish fans had been calling for Ryan’s inclusion ahead of O’Callaghan since before the start of the Six Nations, a reflection of the new pecking order in Munster colours. Ryan’s big performance is little surprise to anybody. He’s looked aggressive, forceful and full of energy in all his substitute appearances to date, and he has shown in provincial colours that he can work well in tandem with Paul O’Connell.

O’Callaghan was, once again, pretty ordinary. He conceded two penalties in a row during the period of Scottish lineout pressure that Ryan’s knock-on had engendered, and was somewhat lucky that referee Pollock didn’t take a harsher line on his continued involvement in the game when a yellow card would have had few plausible arguments against it.

More frustrating still was his well-flagged lack of hitting power. There were a couple of high-profile occasions [21:50 following Cian Healy’s openside break; 65:54 following another Healy carry] where O’Callaghan was the first Irishman in as a rucker in an excellent attacking position, and he egregiously failed to shift the Scottish defender. There should be very few people on your team you’d prefer to have clearing out a static defender at a ruck than your tighthead lock, but O’Callaghan’s efforts were so weak that they defied his 85 caps. Donncha had a consistently good campaign over the 2011 Six Nations, but he we’ve seen some seriously pattycake physicality from him this tournament.

The Scottish team have a nice tradition of voting for the best player on both the opposition team and their own before the post-match function; Richie Gray won the latter award – obviously – and Cian Healy won the former. The Leinster loosehead had a smashing day in both the set-piece and in open play.

In contrast, Cian Healy is all grunt and explosive power. He produced another barn-storming display, smashing holes in the Scottish defense, making outside breaks, and dragging defenders through gaps with him on his way to being the pack’s leading ball-carrier. His front-row partner Rory Best got his name on the score-sheet early doors by smashing through Mike Blair from a neatly worked move, but his line-out throwing was iffy enough; you can’t take the stance that it’s a unit malfunction when the throw is outside the Irish side of the lineout!

Keith Earls continues to grow into the role of outside centre. His defense and decision-making – two elements of his game that have been found wanting in the past – were both in good shape, and his quick feet were in evidence on a number of occasions, even if he never really got the same opportunities in open space he can get on the wing. Rob Kearney had another cracking game for 99% of the match, although his defending for Richie Gray’s try was appalling. The big fellah has 35kg+ on him and is a world class player: he’s going to be able to take the contact and get the pass away to the supporting player for the score, but you’ve still got to force him to make the pass, if only to be seen to do so. As it was, he would have bought whatever Gray was selling: a dummy, a fortnight old kipper, a nice bit of carpet and an oul’ gate …

Some of the criticism of his defense over the championship has been well-merited, while some of it has been in the ante-room to bonkers. There’s no doubt in the Mole’s mind that he needs some of the one-on-one stuff in training [although the matches have been in such close succession that Kidney probably isn’t all that keen on big contact days in between], but he’s also made some good one-on-ones – notably against the Italians and the French.

His usual whipping boy out of the starting line-up, Graeme Morrison didn't look at all like the player who has given the Irish backline defense a tough time in the last three games between the sides. He's also a pretty terrible wanderer in space – who'd have thought it?

The Scots failed to fire in a pretty obvious way. Nick de Luca, who had played so well in his substitute’s appearance against the French was a late scratch in the warm-up due to a hamstring injury, and Max Evans was brought into the team at outside centre. You’d think that Morrison and Evans would play a perfect Little and Large combination – Morrison breaks the tackles, Evans takes the trailing line – but they looked as though they’d never met, nevermind played together as a partnership. Morrison didn’t have O’Gara to run at for the majority of the match, and displayed a surprising lateral streak in space: when the defensive line is approaching fast, he takes the ball north-south, but in space he has a terrible habit of using up all his outside backs’ space and drifting towards the touchline. It’s the sort of thing that an experienced international should have had drilled out of him long ago, but then again, Gregor Townsend is a really ordinary coach.

Greig Laidlaw seems like a nice fellah and has some good touches with the ball, but he’s a very limited sort of player for an international outhalf. His goal-kicking in the first half was solid, but his kicking out of hand was poor by professional standards, and very poor for an international No10. As a guy who can play scrum-half and outhalf, most international squads would kill to have him in their match-day squad, because in theory you can work all sorts of tactical tricks once you have a halfback capable of playing both roles. Duncan Weir – the Jimmy Krankie of the pro game – needs to be retained in the squad rather than dropped at the first opportunity, and Ruaridh Jackson is well worth a third or fourth look. Weir looks to have the mentality that it takes to run a backline at international level, and obviously has the megaboot to both kick points from anywhere inside the opposition half and to kick for a hell of a lot of territory.

The two Scottish opensides were a lot quieter than expected. Rennie and Barclay were going up against a debutant who hasn’t played an awful lot of rugby at No7, and yet really struggled to make their presence felt, which says something for Peter O’Mahony.

O'Mahony had a decent first start to his Irish career – doubtless one of many. He has the aggression and energy to be a smashing openside, and is a more-than-handy lineout option. He went up against two good players in Rennie and Barclay and lost nothing in comparison.

He could yet end up being a really good openside at international level [and The Mole would argue that he’s probably better suited to the position than Sean O’Brien, who is a much better ball-carrier and tackle-breaker], but yesterday was a typical debut – no more, no less. He spent most of the first half getting his breath back, just like pretty much every international debutant – the pace was a lot quicker than expected, and there’s nowhere you’re going to find it tougher than at openside, which has huge aerobic demands. It was interesting to read today that he thought the first 10 minutes were very quick, because they weren’t really; certainly not in comparison to the harum-scarum opening of the French game.

In the second half he was right at the pace of the game, but ironically started making some obvious mistakes and giving away penalties. He had that great steal on the west side of the pitch for a turnover, but he also got skinned by Denton from the base of the Scottish scrum, then immediately gave away two penalties in a row.

O’Mahony is not a guy who has played much openside – he was a No8 at U20s, has played blindside for Munster and has only played three pro games as an openside. The idea that he was doing all sorts of openside things that Sean O’Brien doesn’t do is nonsense. On the other hand, for a guy making his first start, it wasn’t a bad run-out at all: you’d imagine that once he gets more used to the pace of the game with more exposure, he’ll improve and improve.

Having good depth in your squad means that you can’t get all your good players on the pitch at one time, and that some players will be pissed off when the team is announced. Ireland will have David Wallace coming back for the tour to New Zealand, as well as O’Driscoll, Paul O’Connell and Luke Fitzgerald. Richardt Strauss will be coming into the set-up in October/November 2010, and we might see some more good performances in provincial colours over the next couple of months that could prompt promotion.

Before any of that though, it’s a resurgent England on St Patrick’s Day in Twickenham. Should be a cracker!

3 thoughts on “Match Reaction #3: All Kinds Of Everything”