Tommy Bowe: with five tries in three matches so far, he's giving Ryle Nugent every chance to roll that name out with abandon.

The first one may have been a gift, but Bowe’s second try was a thing of beauty born of a turnover in the Irish half and two key attacking decisions. It certainly qualifies as playing rugby in your own half … but probably ‘just enough’, rather than ‘too much’.

There are a couple of interesting moments right at the start which are worth closer examination. Firstly, Pearson could/should have awarded Sean O’Brien the penalty as he effects a picture-perfect steal at the tackle; certainly he allowed the French player [Szarzewski] to hold on for a hell of a long time. It works out well for O’Brien and Ireland, but it was typical of Pearson’s uneven refereeing of the breakdown

Secondly, Andrew Trimble acts with alacrity to turn himself into the scrum-half who gets the whole thing going: off the turnover, Murray had passed to D’Arcy, who stepped a French player, took it into contact and then passed back to Murray, who is tackled and over whom a ruck forms. Realising that Murray’s at the bottom of it, Trimble races in off his wing to act as an interim scrum-half.

While the possession starts with a turnover, it’s not strictly turnover ball – there’s immediately a phase where Ireland take the ball into contact, and it gives the French fifteen seconds or so to organise their defensive line 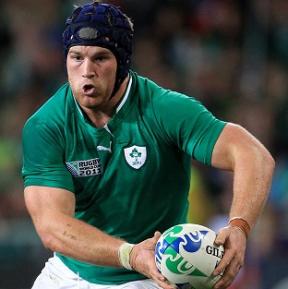 Sean O'Brien – first the steal, then the pass: I thought this guy just ran over people? It mightn't make the highlight reel, but absolutely first-class rugby from the Tullow Tank

Thirdly, Sean O’Brien is the first receiver who dictates that Ireland don’t attack close in. And it comes from a pod! This is one of the features that The Mole pointed to in an earlier article: that the pod should be used as a subterfuge, something to keep the defense narrow to the ruck, and then instead of taking it into contact from a virtually static start [as we did too often in the first couple of games], the first receiver passes back to a deeper-lying distributor with the members of the pod acting as a screen.

The second attacking decision is from Jonny Sexton who, receiving the ball in his own 22, opts to ship it out rather than kick out of defense. It’s not especially ‘on’ – there’s no huge mismatch in numbers or in personnel. You’re not setting up Keith Earls to run around Jean-Baptiste Poux in an acre of space. 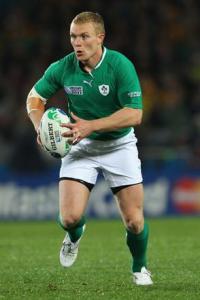 Keith Earls - good decisions and good basics well executed. No-one is ever going to criticize you for drawing your man and giving the winger a good pass.

There’s a good inside line from Robert Kearney as an option for Stephen Ferris, who’s running too laterally and eating up a lot of other people’s space. Keith Earls takes Ferris’ poor pass very well,  straightens up in the wide channel and manages to take the contact and give a good pass at the same time: very good No13 play. All basics – good take from a bad pass, straighten the line, draw the man and give a pass – but all executed well.

There’s some poor defensive communication between Clerc and Fofana – Clerc should always stay out on Tommy Bowe in that situation. He has to have more faith in Fofana and the system; Fofana is less at fault, but he has to let Clerc know that he’s inside him and that he has Earls.

Even with all that good work, Tommy Bowe still had a huge amount to do. A forceful fend on Fofana to set himself clear down the touchline; the ball perfectly dropped on to his foot and chipped over Poitrenaud down the line, then absolutely burning the French fullback, so pacy in attack but looking in this instance like he was turning in mollasses; the patience and composure not to snatch at a bouncing ball and let it come to him, and then the final dummy sold to Trinh-Duc, to make sure that he made it over the try-line untouched.

Bowe hands off Fofana, who has had to go around the back of Clerc, and he's away down the line. Earls did well to encourage Clerc to think he had to make the tackle, because the French winger is long enough in the game to know that he should have gone on to the outside man.

Bowe has scored five times in three games in this championship on the back of a pretty quiet domestic season for the Ospreys [by his high standards]. To be able to raise your game when the standard goes up, and to feed your confidence on sort of lucky events – and the intercept try was an absolute gift – well, it’s just something that you can’t give a player. It’s either in him or it isn’t. If the rumours about him returning to Ulster are true, and everything point to it being a done deal, the burghers at Ravenhill have an absolute gem in their hands.