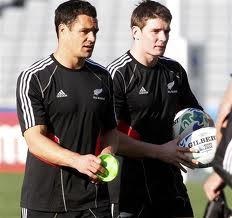 Colin Slade is the Other Guy

Slade has the unenviable task of filling Dan Carter’s shoes for the remainder of the tournament. Seeing as that’s a difficult task, the onus of responsibility will pass to other Kiwi senior players, notably McCaw, Smith and Read.

Ironically, New Zealand have looked the fittest team in world rugby in recent seasons, meshing power and aerobic ability together along with top quality ball skills and long ingrained good habits. And it’s not as though back up Kiwi first fives can’t produce. Back in the ‘90s, Andrew Mehrtens and Carlos Spencer duked it out for the black number 10 jersey. Mehrtens started 62 games in his test career and Spencer a further 30. However, it was Simon Culhane who led NZ to two victories in their long awaited series win in South Africa in 1996 during his six-test All Black career.

Carter is unarguably superior to all the aforementioned players. As the leading point scorer in test rugby, he is a one man attacking threat. However, like all great players, he makes those around him play better and this is where NZ will miss him most.

Carter’s kicking game has developed in the last four years and in recent seasons he has added a few deft grubbers and low flighted cross kicks to his arsenal. One of the hallmarks of his kicks is how frequently he finds space and gets a hop. Rather than necessarily hoof the ball out of play or kick long and give the opposition a chance to counter, Carter frequently puts a short kick through off first phase. This turns the opposition three quarter line, forces their back row to cover deep and challenges their full back to get involved, leaving space in behind. Often these kicks are recoverable by Carter’s own team.

His decision making about when to break is also excellent. New Zealand recycle the ball extremely effectively and quickly, affording the opposition little time to realign in defence. Carter frequently runs at opposition front five forwards who have been stranded in midfield after a few phases. Or, if he doesn’t, then he gives the ball to someone else who can.

Finally, he does everything close to the gain line, usually after running onto the ball rather than taking it standing still and varies his options superbly. It was said of Pelé that “A good player will be thinking maybe two moves ahead; Pelé thinks 10 moves ahead.” Carter does something similar for NZ.  Central to the success of New Zealand rugby is their ability to get over the gain line. Stop them doing that and playing against them gets a whole lot easier. Carter provided them with that attacking threat by playing close to the opposition defence. Slade may call the same moves and run the same attack, but whether he can do it as close to danger as Carter, and vary his game as consistently, is doubtful.

New Zealand’s second half display against Australia in Brisbane was a game that the forwards stepped up the gas in and played a direct and physical style of rugby. Whether they can do that for three test matches, against Argentina, probably South Africa and a northern hemisphere team will decide if they can bridge the 24 year gap to their last World Cup.