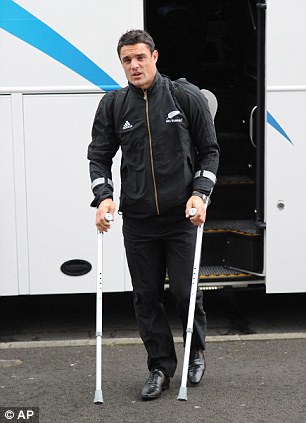 Dan Carter’s groin injury has disappointed just about everyone. Allowing for the fact that it allows all the remaining teams a far better chance of winning the World Cup, it’s not the way you’d want it to happen. Carter has the skills and the marketability to be the sport’s poster boy. His play during his career puts him among the greats of the game and a World Cup would have been the crowning glory.

The Mole’s medical ignorance has been revealed before and leads to him answer the question about how an athlete in peak condition can tear his adductor longus tendon with supposition and guesswork. Carter injured himself place kicking so it may raise questions about repetitive strain but surely that would apply to thousands of professional footballers who undergo a very similar movement on a daily basis. The fact that it isn’t a frequent injury rules that out for your medical sleuth.

Instead, Mole is drawn to the case study of Zen master points automaton, everyone’s favourite White Orc, Jonny Wilkinson. Wilkinson has suffered a run of injuries longer than your arm. The breadth of Wilkinson’s injuries are staggering, this isn’t a dodgy hamstring, or even the dreaded shin splints, that kicks in when the fitness training begins. It’s pretty much everything. After winning the World Cup in 2003, Wilkinson missed almost four entire years of international rugby through injury. Wilkinson is an intense dude. He’s even intense about relaxing, witness his admission about quantum physics and Buddhism.

The thought that springs to mind is that Wilkinson’s injuries, while not psychological, are partly as a result of the stress that he puts himself under, partly as a consequence of the stress that goes with his prominent position. This is also a suspicion I have about Carter’s injury. A phrase commonly used in reference to New Zealand is ‘goldfish bowl’. Dan Carter comes across as a more relaxed individual than Wilkinson but he admitted upon arrival at Perpignan that there was pressure and expectation playing Test rugby in New Zealand.   The incongruous nature of this injury, like it just snapped under tension, makes me think that the unusual pressure got to one of New Zealand’s main men.

1 thought on “Stress, Injuries & the Pivot”