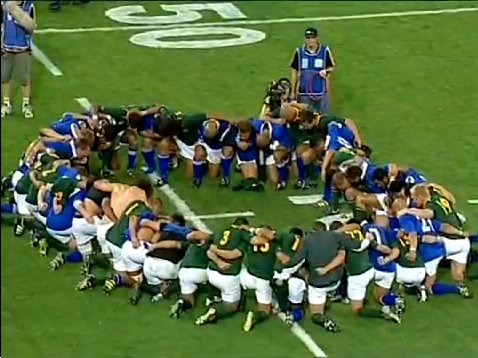 This was a belter of a game in what has been a very good World Cup. Samoa arrived to North Harbour needing to win to have any hope of going through to the quarter finals. South Africa has stuttered against Wales but PdV seemed to have settled on his strongest team and selected it for the match against the Islanders.

Bismarck was given his first start of the tournament and Francois Steyn was retained at inside centre with Lambie at fullback and Jean de Villiers on the bench. PdV had no hesitation starting Habana and Pietersen on the wings despite the fact that Hougaard has looked their most dangerous wideout. His faith was rewarded by Habana finishing excellently in the corner. Prior to that, Habana had chased a high ball and caught it brilliantly. Mole has commented on Habana’s dip in form, and while he isn’t scoring as many tries as he used to, his game is still very strong. Habana is tough and combative, as is Pietersen, and he makes South Africa a difficult team to beat.

Samoa competed hard in this game but Mole felt let down by them in the tournament, having backed them as competition dark horse before things got going. This game was always going to be a floater for the Samoans. Their big match was against Wales and they misjudged it. Fuimaono made his feelings known after that match and unfortunately that seemed to sum up Samoa’s attitude, that of put upon outcasts. Their four day turn around was always going to be tough but they didn’t show much sympathy for Namibia in the first match, themselves coming off the back of a four day turn around. Samoa chose to put out their strongest team in that game and then fielded the same team against Wales. The thing is, they’re not short of talent. Joe Tekori, Census Johnston, Ti’i Paulo and David Lemi, to name a few, were left out of the team against Namibia. All of these players earn their money outside Samoa, playing top class rugby in Europe for their oppressors.

The Samoans also had a discipline problem against South Africa and Paul Williams was sent off with ten minutes left. They did themselves no favours with Nigel Owens and had the look of juvenile offenders posturing against The Man. Their petulance detracted from a good performance but, to be a bit harsh, they only managed four tries in their last three games. The World Cup fixture list mitigates against weaker teams but this is a very open tournament, particularly with NZ’s three best players carrying injuries. Samoa have a lot of good players and had a real opportunity to go far. They missed it.

South Africa proved as obstinate as ever. Frans Steyn’s injury will concern them, he offers a threat that can’t be replicated in the middle of the park and with his howitzer kicking. It seems certain that de Villiers will return to first centre and Lambie will start at full back. That means that Hougaard and either Aplon or Butchie will be on the bench.