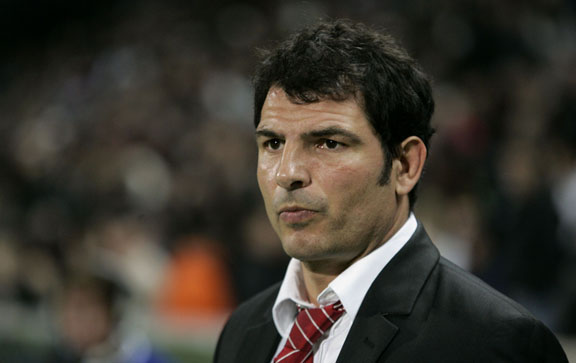 The Mole enjoyed a very good article on ESPN Scrum.com by Ian Moriarty about Marc Lievremont  and his appalling relationship with the media/his players/the French public.

It’s tempting to look at Lievremont’s woes as a French language remake of the Steve Staunton Story: respected ex-pro, plucked from obscurity in his first club management job and shunted into the national job he’s just not ready for.

However, it’s not the case. While floppy-fringed FAI ‘supremo’ John Delaney took Staunton from his first coaching role as player/manager at lowly Walsall, Lievremont had actually coached the French team to victory in the 2006 IRB U21 World Championships, defeating South Africa 24-13 in the final on home soil. On the back of that, he guided sleeping giants Dax to promotion to the Top 14 from the Pro D2 in 2007.

In the wake of Bernie le Fou’s failure to bring home the bacon in RWC07, Lievremont was seen as a new broom by the FFR. He was a coach with whom a new generation of players [spearheaded by 2006 U21 IRB Player of the Year, tortured genius Lionel Beauxis] had formed a bond … and the bond formed had been a winning one.

Laporte’s eight years at the top had seen France crash out to English sides in consecutive World Cup semi-finals; while the 2003 White Orcs were a formidable bunch, the 2007 variety were a comparatively rag-tag outfit [Paul Sackey, Matthew Tait, Andy Gomarsall and Mark Regan started that match, with George Chuter, Peter Richards and Dan Hipkiss on the bench], and the French should have done better in a home semi-final.

However, the integration of ‘his’ young guns [Parra, Trinh-Duc, Picamoles and Mermoz foremost among them] with the old hands of Laporte’s regime was handled in a manner that even close observers would regard as mystifying, scattershot. French caps were given out very cheaply early in his tenure: he picked eighty-eight players in his first three years as coach. Players were tried, discarded, brought back into the fold, changed in position, discarded again; reliable, experienced players [Yannick Jauzion, Jerome Thion] were alienated; other players [Yannick Nyanga, for example] simply weren’t given a chance.

Lievremont didn’t seem to know what sort of team he wanted to build. That would seem to be the crux of his problem. He put players into combinations for a match, maybe two, and then dropped them. From the outside, it looked like he wanted the miracle selection – that he’d pick a team of players who he thought were of the requisite international standard, and that if he hit on the right mix, they’d just click. He never seemed to have a framework in place. “I have my hooker, I have my tighthead, I have my openside, I have my scrum half … now I need to find a first centre, a middle jumper for the second row, and a ball carrier in the backrow”: it never seemed that he got that far.

Coaching international teams is a tough job. You need to reward form, but you also have to remember that rugby is one of the most team-dependent of all team games; it’s not just an exercise in selecting fifteen good players, it’s how they combine with one another. It’s also positionally rigid. A prop can’t do a hooker’s job, for example, even though they play beside one another.

There’s a need for squad depth, yes, but there’s also a need for players to be able to slot into a solid, existing team and perform their roles in a defined structure. Changing the personnel too often dramatically upsets the structure and gameplan in place, and ultimately will negatively affect results.

Of course, it’s not merely his selection that was the issue. Time and time again his reactions to defeat were unpredictable, even unseemly. He tacitly criticized his assistant coach Emile N’Tamack after the disastrous November 2010 run of defeats, saying “I am a forward, and therefore a lot more involved regarding the scrum, but now I am going to take the backs in hand as well. This is not a criticism of Ntamack. I left him on his own and I did not give him enough support”. He called senior players ‘cowards’ after the Six Nations loss to Italy.

Lievremont’s take on himself is interesting, and prompts some sympathy from the Mole:
“I have had enough of the commonly presented image of me being a young man with old-fashioned values; a nice guy but ultimately incompetent.”

The criticism he has received has been personal, but if you’re deeply involved with your job, if you’re passionate about your job, all criticism can be taken as personal. He has reacted sometimes as if he was in the clubhouse of an amateur team, not head coach of one of the biggest international teams in the world. Like it or not, managing the media is a vital part of any professional coach’s job – and an international coach more than any.

His goose is cooked. The FFR have already announced Philippe Saint-André as his successor, even if  by some miracle France win the World Cup. Lievremont is damaged goods, and it’s doubtful that he will get another high-profile coaching job this decade. He hasn’t been a victim of circumstance, but instead has created a wide variety of problems for himself.

He was an excellent player, and I have no doubt that despite some of his more distasteful outbursts, he is fundamentally an honourable man. He has been involved in rugby for almost his entire life: starting at six years old in ÉS Catalane, then nine years in Perpignan that spanned the advent of the professional era, a three year spell at Stade that brought two Bouclier de Brennus and a concluding two years in Biarritz, where he ended his career with another Bouclier.

His entire family have been immersed in rugby, most notably his brothers Thomas and Matthieu, fellow internationals. What should have been the proudest moment for this great rugby family has been soured by antagonism and recrimination, brought down into farce. And unfortunately, Marc Lievremont himself has to take a heavy portion of the blame.

His time at the head of the French team, despite the fact that he took them to a Grand Slam just two seasons ago, will be a source of great disappointment and frustration to him throughout the rest of his career … even his life.