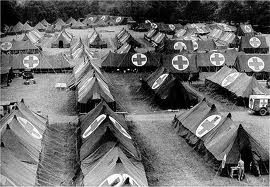 The Wobblies put a hurting on Eddie O’Sullivan’s Eagles in Wellington, running away with an eleven tries to one victory after a competitive first half hour.

Unfortunately, they picked up an absolute rake of injuries in doing so. Grey Man Pat McCabe could well be out of the remainder of the World Cup with a suspected dislocated shoulder, and Anthony Faainga took a horrendous looking knee late in the game when he got his head on the wrong side in an elementary tackle. He was spark out before he hit the ground.

He’s renowned as a good tackler, but in this instance bravery got in the way of very, very basic technique. One of the first things any kid is taught about the tackle is not to get your head in front of the opponent’s knee … use your footwork and whichever shoulder is appropriate to get in there and execute it cleanly and safely. Faainga clearly favoured his right and got his bell rung – and rung hard – for his troubles.

There’re a few rumours from Aussie message boards that luckless centre Rob Horne incurred a facial fracture in the first tackle of the game – it came in midfield and with a huge dunt – and if so, the lad did very well to stay on for so long and contribute to a lot of good first half Australian play.

Still, that’s three Australian centres seriously injured in the space of one game. The good news for Dingo Deans is that Berrick Barnes came on and looked very, very assured. He was used at outhalf and provides a different option to Quade Cooper as a No10 – a little bit more traditional, a little bit more on-the-cuff [as opposed to off-the-cuff]. Cooper switched to fullback, with the red-hot Kurtley Beale coming off to protect a groin strain. The latter had a cracking first half, with a number of outside breaks coming from Aussie counters and from early phase ball. He would be a huge loss for Australia if seriously injured; however, he didn’t look in much discomfort coming off, and it was almost certainly precautionary.

AAC had a belter on the right wing and scored a hat-trick, taking home the Man of the Match award. Well done that man – send a snap of it to Drico! With all those injuries to his midfield brethren, he could well find himself lining up in the No13 jersey outside Berrick Barnes in the No12 in the near future. This is a combination that Deans has tried before [in the 2009 Tri-Nations and the 2010 November NH tour] and has all the raw ingredients to make a complementary partnership with plenty of big-game experience.

In terms of forward play, McCalman had another poor game at openside, and looks ill-equipped to fill that role in any serious capacity. The Mole would liken it [for Irish fans] to Ulster’s repeated selection of Chris Henry in the No7 jersey: it’s just not a good fit.

Wycliff Palu had a decent comeback game, but came off midway through the second-half with a tight hamstring. Rocky Elsom was skinned by J.J. Gagiano [‘I’m walkin’ here!’] off the side of a 5m scrum for the Americans’ try, but otherwise had a good run-out. Nathan Sharpe had a busy game, and should definitely be in any Wallabies’ match-day squad ahead of Rob Simmons … it’s lunacy leaving him out.

Just as with Zoolander Spies against Namibia, grading a set-piece against a second-string side from a Tier Three country is a waste of time. The Wallabies scrummaged well against the Italians, a good scrummaging outfit by anybody’s standards, and struggled against Ireland. It’s impossible to predict how they will do against their quarter-final opponent.

At the moment though, the more pressing issue for Deans is how to manage his backline casualties, and whom he should call up from outside the squad.