Superstar Sonny-Bill Williams has brought some quality mungo offloading from the northern code, but that’s not all that league can offer union.

The Mole made an ass out of umption and was up soreheaded at 8am to watch a game that didn’t kick off for three hours. Here’s mud in yer eye, REM sleep!

Just like the Grand Old Duke of York, I was neither up nor down – not really capable of doing anything that could even be generously termed productive, but also unable to get back to sleep. Crisis.

Jesus, this is a real Franno lede, isn’t it?

Eddie Hemmings and Stevo, who actual has a real name: Michael Stevenson. Who knew? Their likes include Ower Gehm, hosting Boots ‘n’ All  and straight talking. Dislikes? Kick and clap, southerners.

Anyway, The Mole passed the time by slowly brewing some coffee and a battleship class hangover in front of Setanta’s delayed coverage of the NRL. We routinely take the piss out of “Ower Gehm” at Mole Towers, especially the fact that while players have the same positional names as their rugby union counterparts [i.e. prop, centre] they all do pretty much exactly the same thing when they’re on the pitch, namely run into each other and then hump the ground when they get tackled.

However, that’s not to say that we’ve a totally jaundiced view of the northern code. The more often you expose yourself to it, the more you get from it … who’d have thought it? It’s only the way that every single sport works: the more you watch it, the better you understand it, the more interesting it is.

For one thing, the lads that all looked to do exactly the same thing actually do pretty much the same thing, but with subtle variations. For another thing, it seems that when they’re in the red zone, every player on the team has a far better understanding of what is needed to ask the right questions of defense, prompt a moment of confusion and tactically open a gap than their union counterparts. You can slag off their ‘props’ and ‘second-rows’ all you like [and we do], but they actually know what the f*ck they’re doing as part of an attacking unit when the ball is in hand.

League is a far more simple game than union. It has its own rhythm and isn’t without nuance, but it’s The Hobbit to union’s Lord of the Rings. One element of the game which is extremely sophisticated, however – primarily because there is so little variation in how the game can be realistically played within the laws [Lineouts? Mauls? Bueller?] – is attack inside the opposition 20. 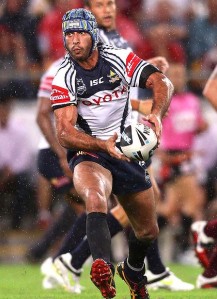 Johnathan Thurston of the North Queensland Cowboys is just about the best conductor of attacking situations in the NRL. There’s a hell of a lot of biff in Ower Gehm, but there’s also good decision-making, intuition and skills if you look for them. In comparison to rugby, there’s a relatively limited series of scenarios in league, but that also means there there are elements of the northern code which have been polished and perfected to a shine.

It’s pretty much always going to be a 12 vs 12 [with the missing men being those two involved in league’s version of the ruck, i.e. the tackler and the tackled player in possession performing the play-the-ball], and the coaches and on-pitch decision-makers have worked out and honed attacking strategies in this situation that are all about subterfuge, with multiple decoy runners trying to pull defenders a step out of position and prompt that split second of uncertainty in their system.

The apparently positionless nature of league means that the phrase ‘forwards in the backline’ isn’t necessarily comparable to a similar situation in union, but the awareness of attacking strategy of off-the-ball forwards on the team in possession in the red zone during the Roosters versus Raiders game this morning – in terms of how they lined up and the angles that their support or decoy lines took – was in stark contrast to some of the witless sh*te that the Wallabies served up in Sydney against the All Blacks.

When good NRL players run laterally, they run really laterally, trying to pull defenders into their gravity and convince them to tackle the player, not the position. They don’t amble across towards the touchline by accident. Forwards come inside on decoy lines, because it’s a believable threat … who’s going to buy an eighteen stone prop backing himself to skin a threequarter on the outside? Players who don’t have the ball recognise that even if they never get it, the line they run is just as important as that of the guy that actually has the pill … you need to attract the attention of tacklers, force them into making a split-second decision on who to tackle.

Then there’s the issue of depth in attack. Just like good soccer players work hard off the ball to make themselves available for a return pass, good rugby players should work hard off the ball to get themselves in threatening positions. That means getting yourself back to a depth from which you can get up sufficient speed to hit the ball at pace, or present a viable threat as a support runner – even if you know you’re going to be a decoy and could likely collect a big hit off the ball. To paraphrase the great softball coach C. Montgomery Burns, “It’s what good players do to win ball games”.

Consistent, hard decoy running takes an awful lot out of the gas tank, but against good teams you have to test the understanding and cohesion of the defensive system, not just the physical ability of players to make tackles.

Australia have traditionally been a tactically astute team, and while they were obviously missing some gifted backs from the starting line-up [Quade Cooper, James O’Connor, Drew Mitchell, even Grey Man Pat McCabe], it was the poor handling and lack of cohesion and understanding in attack which were the most disappointing elements of their performance today. You don’t expect Robbie Deans-coached teams to look like they’re not sure what they’re trying to do .

6 thoughts on “Taking A Lead From Ower Gehm”