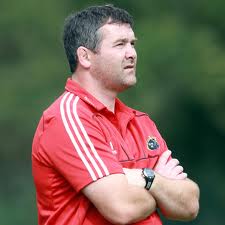 The Heir Apparent. But when does his reign start?

The role of the chief executive of a rugby body is a bit murky to your average supporter. The media don’t shed much light on it, preferring to attribute everything that happens to the head coach, good, bad or indifferent. For example, Leinster built a new training facility in UCD a few years after operating out of a portakabin in Anglesea Road so somebody is doing something but we’re not much the wiser to how it works.

One of the jobs a chief executive might have is deciding who is going to look after operations and how they’re going to do it, with head coach the most important operational role. So important that you’d expect the chief executive to have an envelope tucked away in the top drawer containing a list of names capable of taking over, should the current coach fall under the Cork to Limerick bus or leave when his contract expired.

If you’re the Munster chief executive, that might be a short list. It might just have one word on it – “Axel”. For, no doubt, Foley is seen as a rising star in Munster coaching circles and everyone expects him to get the job, some sooner than others. Foley has done a good job with Munster and Ireland in the areas that he’s been allocated responsibility. The Mole doesn’t think that the technical side of coaching would present that much of a challenge to Foley.

The thing is, there’s a lot more to the head coach’s job than the tracksuit and whistle part of it and it’d be a brave man to take it on without a strong team around him. This is where Foley might fall down at the moment. Alan Quinlan’s article promoting home grown coaches came from the angle that Irish coaches going abroad was some sort of inferiority complex from Irish rugby about itself. But Irish rugby is a small pool and if Michael Bradley, or Mark McCall, or Conor O’Shea or even Eddie O’Sullivan can develop their technical expertise and expand their network on another union’s shilling, that’s not bad for Irish rugby at all. A bit of hunger from coaches to step outside their comfort zone is no bad thing either. Every Australian or Kiwi coach in the Northern Hemisphere has had to leave home and gain that experience that chief executives look for on a CV when making their appointments.

The Mole’s main concern about Foley is that he hasn’t been outside of Munster for any extended part of his career and might not be able to put the team around him that he needs in order to develop young players, alter a style of play that must change upon the impending retirement of Ronan O’Gara, deal with an interfering union and do it all under an intense media spotlight in front of a demanding fan base.

What Munster seem to need at this stage is a grey hair with experience of dealing with pressure, expertise developing back play, who has a wide ranging network of contacts and who has no long term ambitions to be in the job as long as Alex Ferguson or Arsene Wenger. You want somebody who is going to step aside after a year [or two] and who is capable of filling in the areas of expertise that Foley lacks. You want somebody like Graham Henry. Or Ian McGeehan. Arise Sir Ted, Stand Up and Fight!