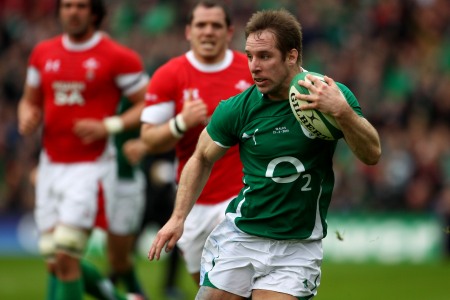 Canal+ are reporting that Munster’s Tomás O’Leary has signed for Perpignan. This move has been rumoured for a couple of weeks, and while O’Leary’s agent has issued a typical non-denial denial, there are a number of factors which point toward it being as good as a done deal. While Donal Lenihan reckons that O’Leary has not yet signed on the line that is dotted [thank you, Glengarry Glen Ross], there’s every indication that O’Leary is off to the sunny sud-ouest.

The Mole would posit that there are three key factors that have led to O’Leary’s decision. 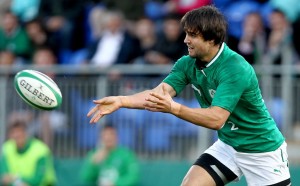 Conor Murray: not only has he taken over O'Leary's day job at Munster, he's also been chosen ahead of him at international level. At 22, he's not going anywhere anytime soon – although doubtless his agent will have the Irish rugby media thinking otherwise when his contract is up for renewal in a year's time

The key issue. To put it in its most basic terms, Murray is simply a better scrum-half than O’Leary. The Mole was never particularly big on O’Leary as a scrum-half, but he certainly had his moments – his performances against Wales and England  in the 2010 Six Nations stand out in the memory. However, those big-time performances were too few and far between. Maybe it’s the inner rugby snob speaking up in this case, but O’Leary never looked like a natural scrum-half … his game was characterised by way too many poor decisions, no understanding of how to manipulate the tempo of a game, and an absolutely appalling pass by professional standards. Even yesterday, playing against Treviso for Munster, O’Leary was caught in possession by a not particularly alert Treviso backrow because he has the tendency to dwell on the ball at the base of rucks.

Maybe Murray’s not there yet [‘there’ being a nebulous location that approximates to consistently good performances at international level], but he’s already better than O’Leary in those three areas mentioned above. And they’re absolutely key areas in scrum-half play.

O’Leary brings a couple of more percent of physicality and pace to the position than Murray does. but it’s a negligible advantage when he falls down in so many other areas. It’s not as though they’re a complimentary pairing either, in the manner of Eoin Reddan and Isaac Boss at Leinster; Stringer [great pass, midget] and O’Leary [appalling pass, physical] might have had that dynamic, but McGahan never chose to use them in the Joe Schmidt manner, i.e. a ‘home’ scrum-half to up the tempo [Stringer] and an ‘away’ scrum-half to bash people [O’Leary]. McGahan puts more emphasis on consistency in selection, rather than competition. That has been good news for O’Leary in the past, because there’ve been times when he has been preferred over Stringer despite being in poor form, but it’s bad news for him now.

Even though the PCRG has given out some very suspect contracts in recent weeks [notably the Denis Leamy two year extension], having missed out on the World Cup squad, O’Leary was very unlikely to have his central contract renewed. He’s the fourth-choice option in a specialist position: awarding a central contract would have been absolutely madness, given that none of the three ahead of him [Murray, Reddan and even Boss] are on one. 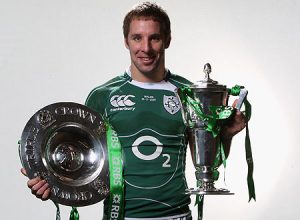 O'Leary with the Triple Crown shield and Six Nations trophy, 2009: 25 years old when this picture was taken and a Lions call-up on the way, it has all gone south for O'Leary since. A change of scenery might be the best thing for him.

That means that Munster would have had to come up with a provincial contract from their own coffers for him if they wanted to keep him. Now, I have no idea what O’Leary was on with the IRFU, but you’d imagine that it was a pretty healthy wedge – after all, despite recent failures of form, he’s a double HEC-winner and was scrum-half on the Grand Slam-winning team of 2009 before being selected for the Lions the same year. If Munster were going to meet the hefty financial terms of the IRFU contract, they’d be looking for 2009-esque, international-class performances from him. O’Leary hasn’t been doing those since … well 2010, but that’s still two years ago.

O’Leary is now, to all extents and purposes, a back-up scrum-half. Why? Because, to be frank, he plays like one. Munster would want to pay him like a back-up scrum-half, not like a first-choice international. If Perpignan want to pay him like a first-choice international, that’s their business. He has been one before, and he’s got the physicality and aggression that should suit the Catalan’s forward-dominated game … then again, what sort of brand of rugby do Munster play?

All three factors are linked: Murray has emerged, O’Leary has lost form, McGahan likes to build a team through consistent selection.

O’Leary has only started four games for Munster this season. He’s played 105 minutes of HEC rugby [no starts] and 310 minutes of Pro 12 rugby this season: just 415 minutes in total. Munster have played 20 competitive games, which amounts to 1600 minutes. Now, you wouldn’t want any player to be playing every minute of that [and indeed the IRFU prohibits their centrally contracted players from playing anywhere near that amount], but O’Leary has got just over 31% of the available gametime … before yesterday’s game against Treviso, it was 23%.

It’s not as though he has missed huge amounts of the season due to injury. If you look at his listing on the Munster website, he has been involved in 14 of the province’s 20 matches this season: that’s 70% of Munster’s games. He hasn’t been involved in Irish squads, so that factor for non-selection at provincial level isn’t relevant. Furthermore, Peter Stringer has left the province on loan to Saracens, so that source of competition is out of the picture, and Duncan Williams – after an absolute nightmare up in Ravenhill at Christmas – doesn’t look like any sort of competition. With Murray away at the World Cup and involved with Ireland, O’Leary should be chowing down on the gametime at Munster. He’s not.

McGahan has given him a lot of time off the bench but the first choice/second choice dynamic is fully in force in Munster, and O’Leary is firmly second choice.

Where Do You Go From Here?

The airport. Peter Stringer will come back from his loan deal with Saracens to finish his career in Munster and thus avail of the government tax scheme relating to professional athletes making their living in Ireland. 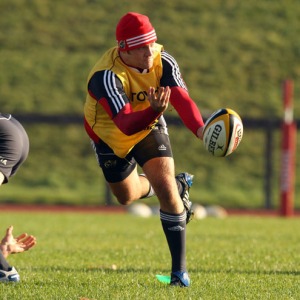 Duncan Williams: hard to show your best form when you're in and out of the team, but time is beginning to tighten on the Cork Con scrum-half's professional career

Obviously Munster would like to keep O’Leary on the books, because every squad needs at least three scrum-halves, more if one of them is away on regular international duty. Duncan Williams turns 26 in a couple of months and has only started seven times for Munster in three seasons; at 173 [5’8”] and 79kg [12st6lbs] he’s very close to Stringer-size, which is no sort of advantage to an underused, inexperienced player. Williams has been injury-prone and has tended towards the jittery end of the spectrum in his Munster performances this season; not ideal bench material, frankly.

You can see why Munster might want O’Leary to stay in that case, but then you look at his recent performances and realise that they don’t want to pay him what he probably thinks he’s worth.

4 thoughts on “Tomás O’Leary To Perpignan?”