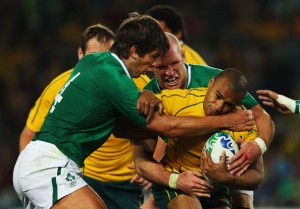 The choke tackle: comes in both green and red for all you colour-blind rugby fans

While the Munster vs Treviso game wasn’t a ‘must-see’ by any definition, there were some intriguing elements to it. That should be qualified to ‘intriguing elements for Irish fans’, because the interest came more in the selection than the action.

In what looked to be a run-through selection for their forthcoming HEC match against Castres, Donncha O’Callaghan was once again left out of the starting XV in favour of Donnacha Ryan. In the back line, Keith Earls was again selected at No13, following his recent return to the jersey for the second match of the Llanelli Scarlets double-header.

In the opening two rounds of the Heineken Cup, Danny Barnes started against Northampton and in Castres at outside centre. However, he was dragged off in the latter game shortly after the second half commenced because he was having an old-fashioned ‘mare. Everyone has them, unfortunately. He was replaced on the day and for the next HEC match [against Scarlets in Llanelli] by Will Chambers, the short-term NIQ signing from Queensland. In turn, Chambers couldn’t hold on to the jersey for the next match, the return against the Scarlets in Thomond Park, ceding it to Earls.

It seems likely that Earls – having found what many commentators consider to be his best position at left wing when on Irish duty last season for the Six Nations – will take over the outside centre jersey for the remainder of the pool stages, maybe through to the end of the season.

Anyway, maybe not absolutely gripping intrigue there, but a few selection wrinkles to keep people interested. The game itself was patchy enough, with Munster somehow managing to bang in four tries against a reasonable team and yet never look particularly convincing. That’s a serious skill in its own right.

For the Mole, the highlight of proceedings was the incredibly effective use of the choke tackle. O’Connell and O’Callaghan have it down to an art, and when joined by another second-row on the pitch [i.e. Ryan or Holland] it’s a smashing tactic to earn turnovers.

An awful lot of the credit should go to Kiss in this regard. O’Callaghan in particular was an absolutely dreadful ‘textbook’ tackler – when was the last time you remember him going low and absolutely blasting somebody or knocking them backwards? He used to be a serial soak-tackle merchant, a sponger who’d concede the gainline almost every time somebody took ball on at him. Thus, while he’d record some very high tackle counts in big matches, it was hard to remember him making any ‘important’ tackles [although in fairness, they’re all important, especially the ones you miss] or ‘offensive’ tackles.

It seems to the Mole that Kiss found a way to limit the negatives of his shoddy tackling technique and lack of explosive power, while playing on the positives of his physique [i.e. tall] and athletic ability [loads of endurance] … and he did this within the context of the laws of the game providing for a turnover, rather than having to physically win the ball before the whistle blows. Innovative stuff.

In terms of the Treviso game, for the most part the ball-carrier was still making a bit of forward progress when he was in contact with O’Callaghan, at least until the second defender showed up. However, instead of trying to bring him to deck [often behind the gainline] as he used to do in the bad old days, new-improved DOC was getting his arms under the ball and using his height and strength endurance to wrestle the guy into a more upright position where he [the carrier] was able to exert less power and make less forward progress.

If you can get a second tall player in on the tackle you can get the carrier even more vertical, making it even tougher for him to get to deck or exert power. There was an occasion when O’Connell, O’Callaghan and Ryan were all in on one Treviso player, and he was literally just about able to get his toes to deck. What are you going to do in that situation? Two of your levers are engaged in holding the ball to your body [your arms, obviously], and the other two [your legs] have no purchase to exert force against! It’s like being hog-tied.

From the tackler’s point of view, from then on on it’s just a case of trusting to your strength endurance to win the wrestle, holding on for the call of ‘maul’ from the ref and winning the turnover. Great stuff from the Munster second-rows.