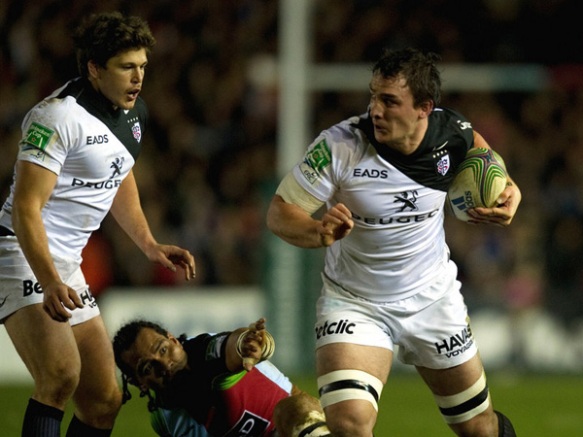 The Iceberg does some damage

In a very timely show of strength, Toulouse put the brakes on the Harlequins bandwagon with a 21-10 win at The Stoop. Quins have been rightly lauded for their very strong start to the season, but all too often the English rugby media can cheerlead without putting results in context.

Winning a string of games against Premiership sides during the World Cup is one thing; competing at European level is another. Harlequins only contributed one player to the English World Cup squad; doubtless it would have been two had Danny Care not been injured, but that’s still just two players. Quins fans can make strong arguments that more of their players should have travelled: Chris Robshaw, Ugo Monye and Mike Brown were in contention. However, none of them had managed to nail down a place under Martin Johnson in the last couple of seasons, and in truth it was no surprise to the wider rugby world when they weren’t selected.

Beyond contributing players to the English squad, only one other member of the Quins squad found himself selected for World Cup duty, Samoan blindside Mauri Fa’asavalu. This meant that Quins were missing just three players from their entire playing roster over the World Cup.

Even when the World Cup was over, Quins were able to maintain their advantage. While the rest of the teams struggled to re-integrate players back from international duty, Quins only had to worry about bringing two players back into the fold. While Fa’asavalu had put in a serious shift for Samoa, starting all their games over the summer and autumn, Nick Easter had played less than two and a half games for England; he was hardly exhausted on his return.

This is all very negative stuff, so credit should go where it’s due. The Harlequins management have managed to put together a squad full of under-rated players who don’t get called up for internationals, but are very capable players; the coaching staff have them playing a cohesive and successful brand of rugby; the players themselves have a strong bond, are confident, hard-nosed about securing wins and are playing well, both as individuals and as a team.

With that said, Harlequins’ form in Europe has been up and down; they snuck a 25-17 victory over lowly Connacht in the first game of the competition, only managing to put the westerners out of bonus point-range with a 78th minute penalty from Nick Evans, and while they put a 28-9 beating on Gloucester in Kingsholm, Gloucester aren’t a particularly good side, having only won four of their games in the Premiership to date. Still, that’s a good result.

Where does that leave them, though? If they’re capable of putting on a good performance against Toulouse in Toulouse – even if they get nothing from it in terms of points – they’re obviously a ‘proper’ Heineken Cup-level team with a strong foundation, and will likely be a force in years to come.

However, sh*t can really hit the fan in Toulouse. The Mole remembers a full-strength Leinster getting absolutely plowed 32-6 over there in November 2008 in a match that brutally outlined in which respective directions the two teams were heading in Europe that season … and Leinster actually won the home fixture in the RDS.

Not only did Harlequins just lose at home, they also failed to get a losing bonus point. While that single point likely won’t have a huge effect on the outcome of the group, it does outline the difference in quality between the sides.