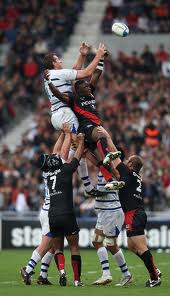 Harlequins face Toulouse with a five day turnaround having travelled the short distance to Wasps last Sunday. Quins have set the pace in the Premiership this season as Conor O’Shea’s low-profile revival washes away some of the Bloodgate stain.

Bloodgate took place during Quins’ last visit to the knock out stages of the Heineken Cup, and this match will probably decide if they finish top of the group or not. If they don’t win then their road victory against Gloucester is likely to earn them one of the second place spots, which would send them on their travels in the quarters.

Quins’ success so far this season is testament to the work done by O’Shea & Co at the Stoop for they are in the most part a team of no stars. Their nerve centre of Easter-Care-Evans is the exception to this, but Care has been injured for most of the matches so far and it has been team work and consistency – allied to Evans’ place kicking – that has them where they are now.

Should Quins win and deny Toulouse a bonus point, they give themselves a great chance of finishing top of the pool. The main effect of this is to set up a titanic quarter final where Toulouse have to travel to one of the top finishers from the pools. Consequently, this is likely to be a match that the French aristocrats target and they have picked a full strength selection. Yannick Nyanga has long been a Mole favourite and offers athleticism as well as set-piece ability. Louis Picamoles will carry strongly while Burgess and McAlister pull the strings from half back with the talented Jean Marc Doussain offering cover.

Toulouse look stronger than ever and Guy Noves knows what it takes to win in Europe and how valuable it is to a franchise like Toulouse. Traditionally, the beginning of the ski season is when Quins take a breather but the professional era has changed a few rhythms. The bookies make this a scratch game which is a reasonable call when the home team is unbeaten and on top of their league, but this is a massive step up for Harlequins and the Mole is calling an away win in a match that will create ripples through the tournament.