Johno in happier times. Doesn't look like it, though.

Having been out of the country and very, very far away from a television set for the Grand Slam decider in 2003, the Mole never experienced the visceral reaction that Martin Johnson’s red-carpet stance prompted from so many Irish rugby fans.

As such, the Mole has never really been anti-Johno at all. His first impressions of the big man were back in 1993, when he was called out to the Lions tour in NZ as cover for Wade Dooley, who had to return home in the aftermath of the death of his father. It seemed a bit of an arrogant, biased call from manager Geoff Cooke at the time … this young lad had only played one international game, and there he was, being picked ahead of the likes of Paddy Johns, who had had a cracking game in the second row in the famous Five Nations win over England in Lansdowne Road – an English team that Johnson couldn’t even get into. Johnno himself says in his autobiography that he was surprised Franno, “a great player and a tremendous athlete”, didn’t get the nod. We’re getting into Willie John and Tom McGurk territory here …

The 1993 Lions was a touring party to which Ireland had only provided two players, Mick Galwey and Nick Popplewell; bringing in another Englishman to replace an Englishman seemed undiplomatic and wrong-headed. Geoff Cooke may have been all of those things – arrogant, biased, undiplomatic, wrong-headed – but he got that call absolutely spot-on.

Johnson showed up like an absolute champ. He had a run-out against Taranaki shortly after his arrival, and then three days later started against Auckland in a bizarrely-scheduled Saturday match between the first and second tests. With just those two games on tour under his belt – and a single international, for which he had been called in as a late replacement – he was selected for the second test against the All Blacks. He had a blinder.

He was up against Robin Brooke in the engine room, and despite being just 23 years old and an international newbie he more than held his own. It was a cracking performance from the Lions that day, and they ran out winners 20 – 7.

Why is that coming up? Two reasons. Firstly, the Mole is sort of sorry to see Johnson go. A couple of aspects of his resignation hint that he went before he was sacked, and the Mole doesn’t think that he’s the big problem with English international rugby. Johnson has been in the job since April 2008, and after three years he won a Six Nations Championship. It’s interesting to look at the last English team that Brian Ashton picked before Johno assumed the role, and the last team that Johnson picked. 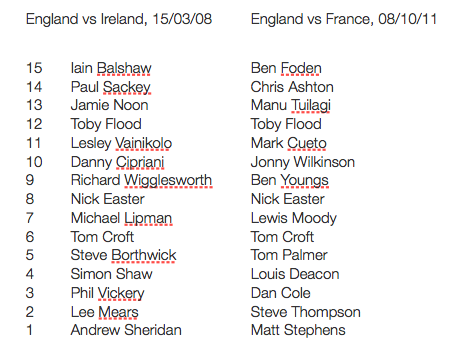 How many of that 2008 English team went on the Lions tour the next year? Five. Sheridan, Mears, Vickery, Shaw and Croft, the last as a late replacement for eye-botherer Alan Quinlan. All the quality, such as it was, was in the pack. Even if Danny Cipriani put in a once-in-a-lifetime performance [literally, from what we’ve seen since] on the day, that Brian Ashton backline is pretty woeful. Less than four years later, and there’s only one player left from it – Tobes.

The comparison between the packs is where the real chewing happens and you get a bit of a taste for what went wrong. The Mole has written previously about the sheer size of the pack that England took to RWC11, and it’s tempting to roll out the same White Orcs blather again when faced with a group who average out at something like117kg. However – and not just in retrospect – Johnson was faced with a real lack of quality up front this time around. All the quantity in the world, none of the quality.

Big Ted Sheridan was a huge loss; he clearly would have started in the QF had he not been injured. He’s the man who makes the English scrum a weapon rather than just a solid unit, and his back-ups, Bunter Stevens and Margarita Corbisiero, just don’t bring anything like his strength or reputation to the table. Dan Cole is a decent replacement for the retired Vickery, though he’ll never be his equal; people who base their opinion of the man on Vickery’s shittest ever game [the first 2009 Lions test against the Boks, where the Beast legally and illegally made mincemeat of him] might have forgotten just how good he was in his prime, i.e. an absolutely world class tighthead.

For his part, Louis Deacon isn’t at the races and while Tom Palmer is quite talented, he blows very hot and cold – simply not what you want from a tight five forward, where graft and effort are the watch-words. Moody [33] and Easter [33] struggled with injury for the entire tournament: Easter started just two matches, the first and the last, while Moody missed the opener against Argentina and only played 80 minutes once, against Scotland. When you take into account that he was the captain, that’s an indication that he wasn’t fully fit for the tournament. Why else would you take your captain off in three out of four games?

You look at that Brian Ashton pack, and though only two of them would start in the pivotal second test for the Lions against the Boks – when the wheat had been sorted from the chaff with regards to some retrospectively dodgy first-test selections – there’s still real quality there. Sheridan, Shaw and Vickery, over various stages of their career, have been dominant international forwards.

In contrast to that, you look across at the pack that Johnson had at his hands and you can really only honestly say that about one player – that they were a dominant international – and that’s Steve Thompson, who’s on the other side of a neck-injury enforced retirement. Nor can you say that it’s a pack growing into itself. Neither Dylan Hartley, Courtney Lawes nor Tom Wood, all three of them Northampton men, were able to force themselves into the team. This was a pack powered by ailing veterans [Moody, Easter, Thompson] and journeymen [Deacon and Stephens].

The Mole has read in the recent past that England’s goal was a final. If whoever in the RFU wrote that thinks that England are consistently one of the best two teams in the world, and that it is thusly a realistic goal, they should resign: they know fuck-all about international rugby. If that’s the reason to bring the axe down on Johnson’s tenure [or at least bring him to pop himself under the guillotine], it’s simply foolish. England simply lack a good bit of playing quality at the moment.

Johnson falling on his sword, as though it was his fault they weren’t finalists, merely obscures the fact that England haven’t produced a genuinely dominant forward since 2004, when Sheridan made his debut.

1 thought on “Sack The Board”