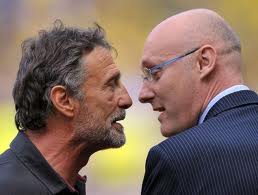 This quote is from ageless Toulousain alchemist Guy Noves and was directed at Gareth Thomas. It came to mind because of two quotes in today’s dailies, one about a ten and one from a ten.Paul O’Connell revealed what its like to play with the Chairman of the Board calling the shots.

“He’s willing to get into a dogfight with anyone and that’s a great thing to have at his age.”

While Jonny Wilkinson talks you through what’s necessary to win the World Cup with a drop goal of your own.

“Don’t get me wrong, you can’t be a rugby expert from an armchair, there are certain physical requirements,” he says. “But given those, the imagery, the visualisation, the understanding, opening your mind, allowing yourself to connect, allowing your spontaneity to happen, allowing those skills to flourish, those are the things that make the difference. Training the brain is way more important than training the body. If you can get that right, that’s how to win the World Cup.”

With all the academies turning out finely honed athletes with impressive dead lifts and bench presses, is something important being missed along the way? And how do you spot that something?