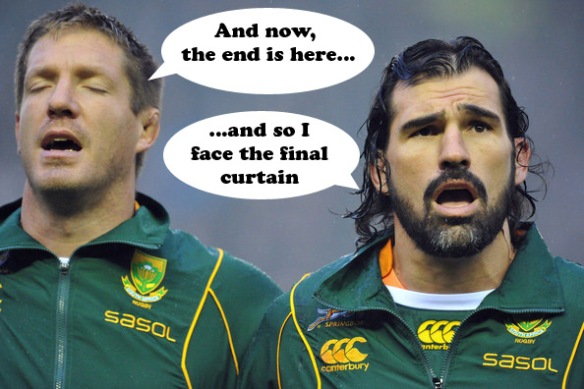 The Mole fancied this Boks team, long on experience and short on expectations, to make a big dent in the tournament, lining up against their age-old rival New Zealnd in the semis to give them a big fright. As it turned out, they were squeezed out in their bizarre quarter final against Australia through shoddy finishing and lacklustre refereeing by Bryce Lawrence, which meant that their territory and possession were not half as useful as they should have been. A week later, Pocock was pinged repeatedly for the same offences against the All Blacks.

Elsewhere they were run ragged by a youthful and hugely determined Welsh team. They got away with that one via missed kicks but also showed their street smarts when it counted. Hougaard’s try was clinically taken with their only really good piece of attacking possession in the second half.

The truth is that though much of this Springboks teams won the World Cup in 2007 with a fairly handy set of games (a poor England, Fiji, a knackered Argentina, England again), they actually peaked in 2009 when they won the Tri-Nations and a really competitive Lions Test series that saw the explosion of loose forward Heinrich Brussouw onto the test rugby scene. By 2011, this team was mostly over the hill and on the way down.

Even though some of the grizzled veterans still have high playing standards, there were caveats. Matfield and Fleshlumpeater Botha both played with niggling injuries (though Iron Man Dannie Roussow ably deputised for the latter), Juan Smith was absent altogether whilst captain and leader John Smit was unfortunately keeping one of world rugby’s most exciting and spectacularly-named players, Bismarck du Plessis, out of the team – and not on form we might add.  A pity too that Heinrich Brussouw took so little part in their key game after shipping a huge blow to the head early on from Dan Vickerman’s knee (accidentally, it should be said) preventing a groundhog-off with Pocock. Their ability to spring a player like Steenkamp or The Beast (though not so much CJ) from the bench to reinvigorate their front row is enviable in world rugby.

Elsewhere, the hard and reliable back division also struggled with form and injuries. While their Tri-Nations performances may have only shown us that their third string team cannot compete on the road, the World Cup did illustrate a few bright sparks. The phenomenally talented Frans Steyn may have found his home on the team at first centre, where he was shifted after injury to de Villiers, while One To Watch Patrick Lambie performed well if not amazingly at fullback. He still lacks size and the question remains, if he goes at ten, where do you put points machine Mourné Steyn [who performed poorly in an experimental role as fullback in the aforementioned Tri-Nations]. The other player who really made an impact from outside the establishment was scrum-half-cum-winger Francois Hougaard, who should have replaced Habana in the starting line-up. The legendary winger may have claimed a try against Namibia to take Joost van der Westhuizen’s Springboks try-scoring record, but otherwise he was a shadow of his former self.

While we thought de Bokke could make a fist of this tournament, they were overall shown up to be too uninventive unless Fran Steyn played first centre, whilst their handling and protection of ball in the breakdown was poor when it came to the crunch against Australia. Their game probably needs to expand beyond the “10-man” style they specialize in. Can the talents of  Lambie and Morné Steyn be maximized in the same team?

Find a solution to losing the greatest lock partnership of the modern era – that will be tough. Victor Matfield has essentially announced his retirement, and while Bakkies has made positive noises about wanting to continue for the Boks, it’s a big ask playing out of Toulon. Replacing two great onfield leaders – John Smit and Suntory Sungoliath-bound Fourie du Preez – will be difficult. Integrating the new(er) talent – Bismark, Hougaard, Lambie around the existing and remaining talent (Fourie, the Steyns, Schalk).

A new coach may seek to make the South Africans play a style of game that is a little less one dimensional. Bear in mind that when the Boks play well, that one dimension is a hell of a dimension, but with a legion of players exiting stage left, along with controversial coach Crazy Piet de Villiers, it will be interesting to see how the Boks restructure their game – or if they do at all. They have a huge playing base and an open-minded policy toward players in the Northern Hemisphere leagues. Choice of new coach will be key [an informed view from Yahoo Answers].