Of all positions the Mole has looked at to date for his Select XV, it’s probably on the wing where there are more worthy contenders than any other. 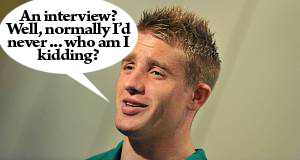 Luke Fitzgerald [23, Ireland and Leinster]: It’s strange to think that a Grand Slammer, double Heineken Cup winner and Lions test starter – not to mention anointed golden-child of Leinster rugby – could manage to miss out for the second World Cup of his international career.

Admittedly, the nightmare of 2007 probably came too early in his career, but his omission this time around in place of Fergus McFadden was still a real surprise, considering the faith shown in him by both Kidney and provincial coach Joe Schmidt over the course of a wretched 2010-11 season where his assertions that he could stake his claim as a fullback were badly exposed.

The season after a very bad injury (cruciate ligament damage against Australia in November 2009) is often quite tough for a player whose game is based so much on speed and dexterity and Fitzgerald’s form dipped badly. Combined with something of a reputation for talking to the press an awful lot, Fitzgerald began to find himself out of favour at the end of Ireland’s Six Nations campaign, where he was replaced by Keith Earls at fullback for Ireland’s only cohesive performance of the tournament. The tail end of last season and indeed the ill-fated Irish warm-up games showed signs that Fitzgerald was overcoming his slump and determined to re-solidify his place in the team. In the end it came too late. Here’s hoping he has a Gordon-D’arcy-post-2003 style explosion in form.

Rupeni Caucaunibuca [31, Stade Toulousain and Fiji] is another man who has remarkably missed out on two Rugby World Cups in a row, despite his phenomenal talent. Caucau is like a Le Tissier or Gascoigne type character. He plays the game with an infectious verve but could never hold down a spot on the international stage that his abilities warranted.

He’s built like a prop forward but has that uncanny Fijian ability to somehow move his bulk at a sprinter’s pace. Like Anthony Horgan! His international career however has been riddled with health, drug and punctuality problems and a general inability to get his shit together. While recently injured (thigh strain) he was available but unpicked by the Fijian management despite buckling down in the last season and a half with none other than Toulouse. Too much water under the bridge with the Fijian management proved crucial in his initial exclusion.

Sitaveni Sivivatu [29, New Zealand and Waikato Chiefs] was a surprise omission from the three-headed hydra’s squad. The Fijian-born winger moved over to New Zealand as a 17 year old, and made his debut in the black jumper against the land of his birth, running in a measly four tries. Is that all you got, Sitaveni? 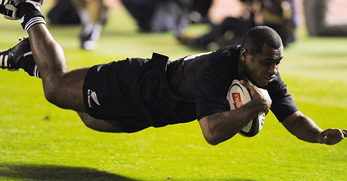 The Mole is going to speculate that the main reason he didn’t make the NZ world cup squad is because he missed 19 months of international rugby between Nov 09 and Jul 2011. That’s quite a stint. Initially he was hit by a shoulder problem, then a serious knee injury stalled his comeback. However, he made a try-scoring return to form in July of this year against Fiji [again!] and also dotted down against the Wobs in the first game of the Tri-Nations.

He has scored 29 tries in 45 test appearances for New Zealand, and a further 4 in 3 games for the Pacific Islands. While it’s an excellent try-scoring rate by any standards, just like Joe Rokocoko he was a far more devastating finisher as a youngster than as a veteran: 27 tries in his first 26 internationals and 6 in his last 22. He’s on his way to Clermont as a replacement for Naps Nalaga – still a good buy for the Michelin Man, but I don’t think they’ll get anything like the return they got from the Fijian … sorry, they’re both Fijians. The younger Fijian.

Joe Rokocoko [28, NZ and Auckland Blues] is a burnt-out husk of the player he used to be. An incredibly harsh take, but ultimately – and sadly, in the Mole’s eyes – an accurate one. His record of 46 tries from 68 test matches is astounding, and speaks volumes of the player he was at his peak. This was a guy who ran in hat-tricks of tries against France, England and Australia in a twelve month period between June 2003 and June 2004.

However, the story of his decline is almost cruel. Since the 2007 Rugby World Cup – and Joe Rockets only turned 24 years old three months before that competition – he has scored only three tries in test rugby. Three tries in twenty games. Three tries in four years. That’s a horrific loss of form when compared to his early career.

His try-scoring feats between the ages of 20 to 24 were remarkable: 43 tries in 48 test appearances. Holy smokes. Look at how good he was:

Julien Malzieu [28, France & Clermont Auvergne]: the Mole would have had him over Huget in the first place. He’s a player with whom Irish fans are very familiar – Clermont Auvergne have played against either Munster or Leinster in the Heineken Cup every year of the last four. His height and pace cause a lot of problems – very, very good in the air, very long reach for dotting down tries in the corner, difficult to tackle in a one-on-one situation.

He lacks the out-and-out class of Medard, Clerc or Heymans – all of them classic French wingers – but is the type of player who could have seen a lot of use in a weak group like the French have. The Mole can’t really see what Huget brings to the party that Malzieu doesn’t: both of them are pretty much big wingers, with a sideline in not-a-whole-lot-else.  Still, hardly Clouseau’s strangest decision.