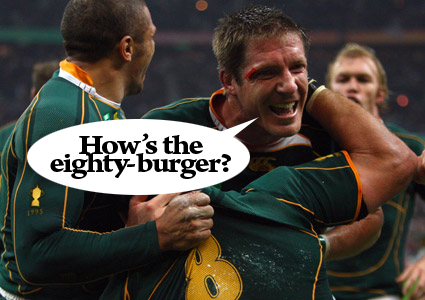 When Willem Alberts heard his opposite number was Jacques Burger, all he could think of was the next meal. At Fergburger.

South Africa just put an eighty-burger on the hapless Namibians.

The Boks don’t really have the resources to field a weak team in this World Cup: they’ve just got too many good players in their squad. Crazy Piet gave a lot of fringe players a chance to make the squad in the opening two games of the Tri-Nations, and not many of them took it. As a result, he opted to select some well-tried and high-quality overseas-based players like Frans Steyn, Johann Muller and Ruan Pienaar – an option that Graham Henry and Dingo Deans would have done well to look at.

Even missing quality internationals like the du Plessis brothers, Matfield, Brussow, du Preez and de Villiers from the starting lineup for this match, the South Africans were far too strong for a largely amateur Namibian side to whom the draw hasn’t been at all favourable. When you can replace those players listed above with the likes of John Smit, CJ van der Linde, Ironman Danie Roussouw, Willem Alberts, Francois Hougaard and Frans Steyn, the depth of the Bok squad really becomes apparent.

Another strength that is most apparent in this South African outfit – as mentioned previously in the Mole’s SA Squad Review – is the genuine versatility of their players. Lads like Hougaard [wing/scrum-half], Francois Steyn [fullback/first centre], Ruan Pienaar [scrum-half/outhalf] and Pat Lambie [fullback/outhalf] in the backs and Russouw [secondrow/blindside/No8] and John Smit [hooker/tighthead] in the pack are players who have shown true international class in a number of positions.

There were quite a few of these positional switches called into play in the second half. Smit moved across to tighthead to accommodate Chiliboy Ralepelle at hooker, CJ van der Linde making way. Hougaard moved to left wing from scrum-half for Bryan Habana, with Fourie du Preez coming off the bench to take over at the base of the scrum. Ulster’s Ruan Pienaar replaced Morné Steyn at outhalf with some twenty minutes to play … forget Marc Lievremont, Crazy Piet now had three scrum-halves on the pitch at the same time! Extravagant.

Namibia had very little to offer this game but their courage. Being on the end of such a thumping and not even getting on the scoreboard must be hugely dispiriting. While they were able to keep the scoreline down for an hour, the Boks really opened them up in the last twenty … they scored seven tries in that period, and the score went from 38-0 on 59 minutes to 87-0 on 79 minutes. Mercy.

The Boks were a bit careless and grabby in the first half, but still had the four-try bonus point notched up before the break. As a contest, it was never in doubt.

In terms of try-scorers, pacy midget Gio Aplon was selected on the right wing and crossed for two of ‘em, one in each half. Aplon has seen far more gametime at fullback this year than out wide, but has the pace and the running skills to keep his place on the wing for any quarterfinal fixture. Try-starved Bryan Habana got over for a first-half score – maybe that will open the floodgates for him. Probably not, though.

The five-pointer nevertheless takes him clear of Joost van der Westhuizen and makes him the try-scoringest player in the history of South African rugby, with 39 tries from 72 Tests.

It’s also his first try in twelve games. He seems to have lost the X-factor that made him a phenomenon four years ago, and really doesn’t look anything like the player he used to be. The Mole is not convinced – not convinced at all – that he should retain his place in the starting line-up.

Chunky Willem Alberts took home the Man of the Match award for his game in the Boks No6 jersey. That nominally made him the openside flanker under the South African numbering system. He must be the biggest one ever, tipping the scales at 192cm [6’4″] and 119kg [18st10lbs]: Ben Clarke eat your heart out … or just eat.

Zoolander? A reasonable game and a well-used lineout target, but an 87-0 romp is hardly the game to make any definitive judgments on a player. Strong doubts linger over whether he is an important – never mind vital – part of this Bok team, and the Mole would like to see an Alberts [blindside], Brussow [openside] and Burger [No8] backrow against Samoa. While it would weaken the lineout, the close-in-carrying heft of Alberts and the footballing nous and ferocity of Burger would make a great combination.

There are a couple of points about South Africa that the Mole would include as he wraps up: firstly, they’re looking very, very confident, if not perhaps as clinical as New Zealand. Ironman Russouw’s excellent form is a real plus for Crazy Piet … he has put together three strong performances on the hoof, and has covered both Bakkies’ and Matfield’s absences. With John Smit having started all three wins so far, he has more than done his share and has been duly honoured: if Victor comes back from injury before the QFs, we may yet see him assume the match-day captaincy, with a fired-up and pissed-off Bismarck brought in at hooker.

Crazy Piet has some selection headaches ahead of them, but they’re the good ones that you’d want to have.