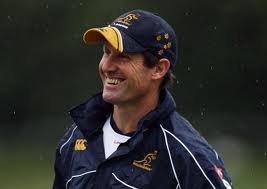 Fly my pretties, fly. Just don't try to maul it.

A few things have stood out for the Mole after the first round of matches:

Firstly, the Rugby World Cup is a Good Thing. Yes, it overshadows traditional tournaments, disrupts the season, the politics of who gets the tournament is not transparent and hoteliers gouge fans but the atmosphere, sense of occasion and opportunity to see rugby cultures collide in competitive test matches is great.

Place Kicking: There must be something up with the new Gilbert, there are some serious marksmen whose return with the placed ball is waaay below normal.

Closeness of matches: Backing the underdog on the handicap would have resulted in a win in every game. OK, there are still a few games on the horizon that could be complete carnage but the first round of games has been very competitive. Wales v SA was the pick of the bunch but Argentina could have beaten England while Japan gave France a good run in the second half, as Tonga did against New Zealand. The Islanders in particular seem to have benefitted from the opportunity to pick their best players and train together for six weeks in the lead up to the tournament.

Uncertain selections: Even after four years of planning, there are a few teams that look either half baked or stale. France spluttered at times against Japan and seemed unable to find any rhythm to their game. Nor, for that matter, did Ireland or SA. South Africa still did just enough to fend off a gutsy Welsh challenge. Wales took a time to get to the pitch of the game and faded near the end. They should have won the game, it would have been a fair reward for their daring and vigour. A lack of composure and belief probably caught up with them at the end of the game. No such problems for England who displayed precious little vigour but have the confidence that comes from three appearances in the final.

Confident Australia:  the Wallabies looked good in the second half against Italy. Real good. Mole made reference to Gamblor’s comment in another post:

“You just have to keep wearing teams down, keep holding on to the ball and going through it and then putting over a fella with just simple hands at the end of 15 or 16 phases, or else a penalty results. We’re probably looking to come up with big plays too frequently and we’ve just got to get back to basics and hold on to the ball and keep our error-rate down.”

Nobody told the Wallabies this one. The green and gold were able to string a number of high tempo phases together but Adam Ashley Cooper’s try was a thing of simplicity and beauty. Moore threw to Horwill at three who won his ball unopposed and flicked it down to Genia. Genia took a step and threw a flat pass into the path of hot tempered larrikin James O’Connor who came in from his blindside wing and took on the Italian midfield defence. The grey man, Pat McCabe, was in to ruck just ahead of Pocock and Alexander, blitzing any Italians out of the way. Genia threw another flat pass into the path of the mercurial Quade Cooper who had Rocky Elsom looming behind him and two more runners outside. Cooper held straight and AAC hit the outside-in line to go through a fragmented Italian defence untouched. The camera panned to a satisfied looking Dingo Deans who allowed a smile to flicker across his face. Well drilled set pieces; hard, straight running; decisiveness and commitment about channel of attack; good basic skills executed near the gain line – easy game. Going through a load of slow phases while waiting for the opposition to get penalised might work in front of a rabid home crowd. At the top level in a neutral venue, it requires a lot more physicality in contact than Ireland displayed on Sunday and even then isn’t guaranteed to work – witness most of South Africa’s attack against Wales.

Crap Mauling: like nearly every team in the world, even the well drilled Wallabies can’t maul effectively. Mole is in a dwindling minority about this, but believes that the en vogue mauling technique followed by nearly every team is ineffective and usually illegal. You know the one: ball at the back with an outrider holding on to a teammate’s jersey with his fingertips. Think Jerry Flannery. David Pocock was the Wallaby outrider in one instance and with the ball in one hand, disengaged the other in order to change his grip, right in front of referee Rolland. If he lets go and reattaches then it’s obstruction! The Mole has only seen one team that could maul effectively this season: John Mitchell’s Lions who stuck the ball up their jumper in the middle of six men and marched over whoever was in the way. Bring it back!