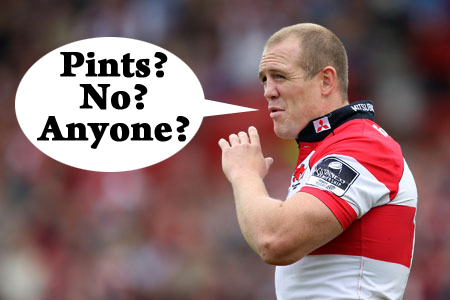 Someone else has to drive home though, I left my keys at the palace ... and I've been banned from driving for three years.

“We speak about that whenever we go away and we’ll do that again when we hit the ground,” said Johnson.

Martin Johnson isn’t laying down a code of conduct for his players that includes curfews or drinking bans, even though the last English tour to New Zealand in 2008 ran aground amidst a fairly public sex scandal. Ah, Topsy Ojo and Mike Brown … the difference between you two in comparison with David Strettle and Danny Care is that you probably should never have been capped in the first place.

The Mole congratulates Johno on his judgment: the good ship HSS Tindall is banned from Her Majesty’s turnpikes for a period of three years owing to taking the reins of a stagecoach after one too many small beers, but it doesn’t stop him putting in nicely weighted grubbers or laying the wood on an anaemic Irish midfield, so he’s still on the school XV.

Besides, who would deny the Kiwis a bit of English rugby culcha? It will likely be better value than the bish bash bosh stuff they produce on the pitch: