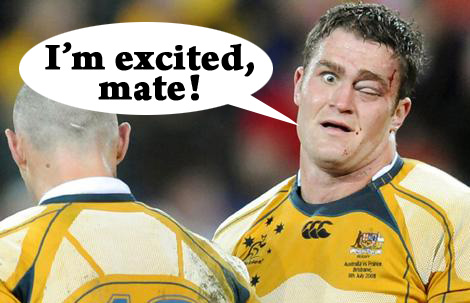 James Horwill has long been a focal point for any team he is a member of. His appointment as captain of Australia’s World Cup squad confirmed his leadership role. His influence was immediate as a confident Australia got stuck into New Zealand from the first whistle and showed no respect for reputation. Horwill has already captained Queensland to the Super 15 title this season and this victory meant that his team won the Tri Nations title for the first time in a decade.

In the first few minutes of the Auckland fixture, Quade Cooper threw an inside pass to a runner who got smashed by the New Zealand defence. That set the tone for the whole day and Australia were on the back foot throughout, allowing New Zealand to produce quick ruck ball and attack repeatedly. There was to be no repeat in Brisbane. Australia countered and competed in every ruck. They turned New Zealand with a series of kicks and chased hard after them. Australia dominated territory and possession in the first half while New Zealand suffered two injuries to their back row. Keiran Read hobbled off with what seemed to be an ankle complaint while Adam Thomson injured his arm. He stayed on for a few minutes but his injury led to him missing a tackle on Radike Samo that proved costly as the veteran Fijian broke the line and outstripped the defence from 40 metres.

A few things stood out in this game. Richie McCaw is a great player and captain and Dan Carter is the best fly half in the world. However, it wasn’t until half time that New Zealand decided to change tactics that were patently unsuited to the conditions. Their insistence on running the ball in slippery conditions led to numerous turnovers and allowed Australia to build a large half time lead. New Zealand again spurned the chance to set up a drop goal opportunity and get the score board moving and didn’t have enough possession in the Australian half to earn kickable penalties. This tactical rigidity cost them the game and smacked of arrogance. The decision to change tack at half time was correct but came too late. Ali Williams outshone Sam Whitelock when he came on while Zac Guildford had a horror, repeatedly spilling the football and giving the Australian kickers something to aim at. New Zealand get a lot of decisions from referees and the Australian commentators remarked repeatedly at how the Kiwis were not behind the back foot. They might also have mentioned how many times they are off their feet at rucks and how infrequently they are penalised for it. New Zealand’s willpower to drag themselves back in the game was impressive. Replacements Victor Vito and Ali Williams each had good games off the bench.

Australia made the most of their talents. Quade Cooper made very few errors but it was the man inside him who was responsible for much of Australia’s good play. Will Genia has inherited Stephen Larkham’s crown as the king of the mismatch. He beat two front row forwards at the side of a ruck to score his try and set up Kurtley Beale with another snipe against the heavier men in the second half. Earlier in the series he did exactly the same thing to South Africa, skinning two fatties before giving Digby Ioane a run to the line. Genia’s kicking was also excellent and he is the currently the top scrum half in world rugby. David Pocock showed a return to form and Radike Samo rolled back the years to score a superb individual try. Australia have an ability to score from deep and it is this potency that makes them so dangerous. They had a few set piece jitters early on but remained composed throughout the game.

This loss may be what New Zealand needed but is also likely to sow seeds of doubt in the minds of a fanatical rugby public desperate for World Cup glory. Martin Johnson established that he wanted his England team to win ugly rather than lose prettily. New Zealand found that out the hard way in Brisbane.