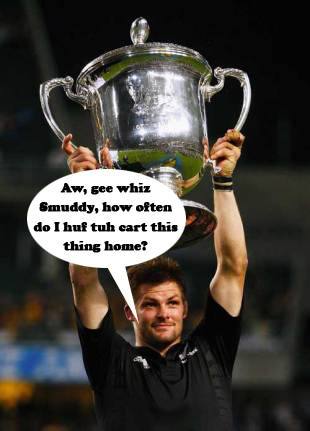 The Tri Nations will be decided this weekend in Brisbane. Australia and New Zealand enter level on points after three games. New Zealand won the teams’ earlier encounter.

Australian coach Robbie Deans suspended James O’Connor after the young winger failed to attend the squad announcement following a night on the sauce. While O’Connor is sure to feature prominently in the World Cup, his omission highlights the slightly threadbare nature of the Australian squad. Drew Mitchell’s injury and Matt Giteau’s omission mean that Adam Ashley-Cooper moves to the wing and Anthony Fainga’a comes into the centre. O’Connor is a smashing ball carrier, first choice place kicker and capable of filling a playmaker role. Fainga’a is a steady defender. His partnership with McCabe looks ordinary. Deans has chosen 35 year old Radike Samo, the least physical international no 8 since Michael Owen was feathering passes around in the backline, ahead of form man Scott Higginbotham. He has also recalled former Cambridge University captain Daniel Vickerman to partner new captain Horwill.

Graham Henry spared his main men the trip to South Africa last week but brings them back for this game. Tony Woodcock and Owen Franks seem to have got the nod as first choice props. Sam Whitelock sees off Ali Williams for a starting berth alongside Brad Thorn. Adam Thomson has a chance to shine in Jerome Kaino’s absence. Sunny-Bull is still behind Nonu for the first centre spot. New Zealand’s strength at wing, where Cory Jane and Zac Guildford are selected, is a contrast to Australia’s relative paucity of options.

I think New Zealand will win this one by a few tries. South Africa’s team against Australia was short of match fitness when the Aussies beat them and if John Smit hadn’t moved to prop it is unlikely that Australia would have gotten the upper hand. New Zealand were beaten comprehensively on the score board in Port Elizabeth but were missing all their key men. Dan Carter’s general play, a stronger New Zealand scrum, the lack of a front line Australian goal kicker and a potent New Zealand back row means that the men in black will likely have too much firepower. The line is New Zealand by 4, I think they’ll get past that. Be warned, though, that backing away team jollies is the way to the poor house!