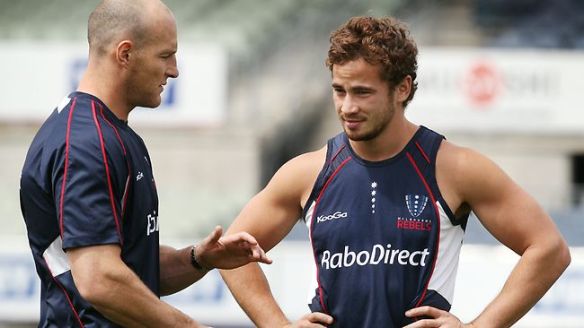 The Melbourne Rebels roll into the RDS tonight, and while the Anglesea Terrace Ultras will have all eyes fixed on the performance of a young Leinster team with a number of debutants, two big names in the visitor’s side will provide another focus to the casual viewer.

Stirling Mortlock and Danny Cipriani are big names in world rugby, despite the fact that neither of them are perhaps the draw they were three years ago. Back in 2008, Mortlock was the captain of the Wallabies, and Cipriani was coming off a magnificent performance where he oversaw the dismantling of Ireland in the final game of the Six Nations at Twickenham. Within the English rugby media, the rush to acclaim Cipriani as the heir to injury-prone Jonny Wilkinson  – ‘injury-prone’ is putting it mildly; maybe ‘injury-decimated’ is more accurate – may have been unseemly, but it wasn’t totally without evidence. Cipriani’s game that day showed a rounded game management and leadership that, allied to his natural pace and footballing skills, seemed to mark him out as a potentially world class outside half.

You can be philosophical and say that it just hasn’t happened for Cipriani [or it hasn’t happened yet: he’s still only 23 years old] but the traditionalists amongst us will likely ally themselves with the opinion that he hasn’t made it happen. Cipriani’s career has been marked by off-the-field incidents, and by his complicity with some elements of the English media to create a tabloid-class star who could compete for celebrity coverage with the Big Time Charlies of the Premiership.

Whether it’s getting knocked out by Josh Lewsey in a training-ground punch-up or running afoul with not just one, but two of his coaches, Martin Johnson and Rod MacQueen, both of whom have long since hewn their legendary status in the annals of game, Cipriani has managed to rub a lot of important people up the wrong way. With Toby Flood going backwards at the moment, Wilkinson coming on strong and veteran non-tackler Charlie Hodgson on the verge of recall to bring his silky distribution skills and flaky big-game temperament to a moribund English back division, Cipriani is nowhere in England’s world cup plans. He hasn’t progressed as a player since the early days of his career with Wasps and England, and one gets the feeling that his stint in Melbourne is as much an exile as it is a renewal.

If he is willing to look, listen and learn, there’s a phenomenal example of making the most of your talent just a couple of passes outside him. Stirling Mortlock is, in many ways, the anti-Cipriani: a big, ugly artisan of a centre who has wrung every drop of talent out of himself, constructed a few more out of nothing but hard work, practice and dedication and built a career at international level that saw him go from a skinny utility back on the fringes of the Wallaby squad to the heartbeat and spiritual leader of the national team.

Mortlock is unfashionable, balding, muscle-bound and ghostly pale in contrast to the svelte, dark Cipriani, but those are merely surface contrasts. Cipriani seemingly has every skill under the sun available to him at the blink of an eyelid, whereas Mortlock has made himself a goal-kicker, a distributor, a world class outside centre and a captain admired and respected by his team-mates and the country he represents. In doing so, he has won 80 caps for his country, scored 29 tries – the most memorable of them being the dramatic runaway against New Zealand in the 2003 RWC semi-final – and earned his place in the memories and hearts of the rugby public.

A legend is going to take the pitch tonight in the RDS, and it’s the big ugly bastard in the 13 jumper.